Angel Food Cake is an American classic. Light and airy, it is butterless and tastes somewhere between a meringue and a cake. The Southern classic is flavoured with vanilla and almond. A perfect heavenly delight on a summery day!

What is Angel Food Cake?

Angel Food Cake is quite simply a meringue based cake, leavened with stiff whipped egg whites. It is traditionally flavoured with vanilla and a bit of almond extract, though different flavours are certainly possible.

In its classic form, it is not frosted as the crisp dry top is part of the desired effect. You can find Angel Food Cake served with cream or berries alongside.

Its heavenly light white disposition gives it the name Angel Food in contrast to the deep chocolate Devil's Food, which is a related meringue based recipe.

My recipe below is loosely based on a version from Taste of Home, with some tips and tweaks.

The key to an Angel Food Cake is an incredibly light sponge! In order to ensure that you achieve this, you need to sift your flour, not once but twice.

Honestly, I have a history of avoiding sifting my ingredients. It stems from a long tradition of not wanting to wash extra plates or equipment. A few dense cakes has taught me the valuable lesson that sifting is important - in some cakes more than others. Sifting helps to lighten the flour and evenly distributes your dry ingredients. The result is a more evenly risen lighter cake overall. This is very important to the Angel Food Cake

Angel Food Cake relies on the egg white meringue. I cannot stress enough: do yourself the favour and take your time in separating the eggs.

This process will save you time and worry, giving you more control. If one of your egg yolks breaks while you are separating, you will only contaminate one egg white as opposed to the whole mixing bowl.

The single most important part of this cake recipe (if we rank all elements) is whisking a stiff peaked meringue.

You can find egg white meringues in many classic southern recipes, including the traditional Devil's Food Cake. It is a great way to add extra air to a cake, for a lighter sponge.

Some things to look out for in making the meringue:

4. Gently Fold in the Dry Ingredients

Once you've made your meringue, you need to incorporate the dry flour mixture. To do this, add it in a couple of additions, gently folding after each. The main thing here is to avoid knocking out too much air! After going through all the trouble of making the meringue, you don't want to remove all of that lightness. But, you also want to ensure that the mixture is fully incorporated, so you don't want to see any obvious pockets of flour.

5. Use a Knife to Remove Excess Air Pockets

Once the batter has been gently added to the pan, use a knife to remove excess air bubbles. Insert this into the batter and lightly cut through in a swirling pattern. This will help ensure the batter is spread evenly while also knocking out air pockets.

You'll use a knife again at the end to help cut remove the cake from the pan.

Leaving the cake to cool inverted allows gravity to help maintaining the rise and lightness of the meringue. The cake will start to fall out of the pan a bit, pulling down on the loose base. This means that the cake does not collapse in on itself, which would happen if left to cool in the tin not inverted.

Unlike a spring form pan, a loose based pan doesn't involve a latch on the side in order to remove the bottom insert. For an Angel Food Cake, it is useful to have the loose base. Part of the traditional cooling process is to invert the cake and allow this to slowly begin to fall out of the tin. Once cooled, when removing from the tin, the loose base allows you to remove the cake sides first and then to detach carefully from the bottom using a standard kitchen knife.

These allow for cooling the cake inverted. Without the feet, if you were to flip the warm cake upside down to cool, you would trap heat and moisture. This could ruin the work of the meringue, making the cake more dense and damaging the crispness of the dried top.

You could cool a traditional pan upside down on a wire rack, to enable the gap and the air to circulate.

The centre hole, like a donut hole or a bundt cake pan, is significant to providing an even bake for the batter. Again, this contributes to the lightness of the cake. Without the hole, the cake would take longer to bake, in order for the heat to reach the middle.

You could use other pans, but the result may be a more dense bake with more risk of burning the top.

This may seem a bit counter intuitive, but your Angel Food Cake pan shouldn't be non-stick. It also should not be greased!

Ideas for Using Up Extra Yolks

This recipe calls for 9 egg whites, if you're looking for ways to use up the yolks, you may like:

If you liked this recipe, you may also like: 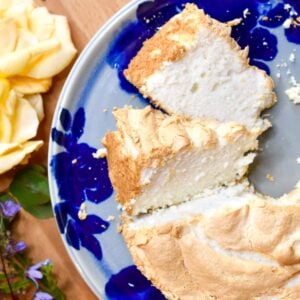