So, I'm on a bit of a cupcake kick at the moment. Following my cinnamon peach poundcake cupcakes, I found myself having a rekindled appreciation for the basic cupcake. They are, after all, easy single serving cakes. What's not to love? The opportunity came recently (courtesy of a friend on social media), to travel through food to Mexico. As a baker, the first thing that came to mind as a Mexican-inspired dessert was tres leches cake. Tres leches is one of my favourites - such a simple but decadent dessert, filled to the brim with milk, condensed milk and evaporated milk. The problem I always have with the full size cake, is that I naturally try to eat it all. So, this time, I decided to re-invent the classic cake into a small batch of tres leches cupcakes!

The measurements in my recipe will be sufficient for 9 cupcakes. You could fill your cupcake cases further and make only 6, but I opted for fairly small cakes. They will rise in the oven, so I would caution against overfilling!

In a medium bowl, use a handheld electric whisk to beat your egg whites. You will want to beat these for a couple of minutes on high until soft foamy peaks begin to form. Start to add your ⅓ cup of sugar a small bit at a time. I find that adding by half a tablespoon increments works well. This is to ensure it is evenly incorporated. Your mixture should start to become glossy and you are looking for stiffer peaks to form.

In a separate larger bowl, using the same whisk (no need to replace the beaters), beat your egg yolks, vanilla and 2 tablespoons of sugar until light and frothy. Add your dry ingredients (flour, baking powder, salt and cinnamon) along with ¼ cup of milk. Fold this together with a spatula until well combined. Then, add a large spoonful of the egg white mixture and stir to combine. This will help to loosen up the mixture in preparation for the rest of the egg white meringue. Now, add the remaining egg white mixture and gently fold through.

Spoon your mixture into your prepared cupcake cases until about half to ¾ full. Bake in your pre-heated oven for about 20 minutes, until a skewer inserted in the centre comes out clean.

While your cupcakes bake, mix together you evaporated milk, condensed milk and 1 ½ tablespoons of cream. Set this aside.

Once your cupcakes are done, remove from the oven and allow to cool for about 5 minutes in the pan. Poke them with a toothpick and then start to feed them your milk mixture. This can get a bit messy - for the sake of structure, I would leave the cupcakes in the tin, and use a tablespoon to gently glaze the tops with the milk mixture. As you go through doing this to each cupcake, they will begin to absorb the mixture. Repeat the process 3 or 4 times, until they stop soaking in quickly.

Leave them to soak in a bit. You can add more liquid directly to the tops later on in the hopes more will sink in. If you're in more of a rush, you can just serve the excess milk mixture on the side. I opted for little pipettes filled with the milk mixture. This allowed me to finish off the making of the cupcakes quickly, but provided an easy way to add more milk when ready to serve.

Topping Off Your Tres Leches Cupcakes

To finish off the cupcakes, whip about ½ cup of heavy cream, ½ tablespoon of powdered sugar (no need to sift) and ½ teaspoon of vanilla. I used a stand mixer but your handheld electric beater will work as well! Once this comes together into a thick cream, dollop or pipe onto the tops of the cupcakes. As a final touch, dust with cinnamon. Serve with any leftover milk mixture. They're now ready to enjoy! 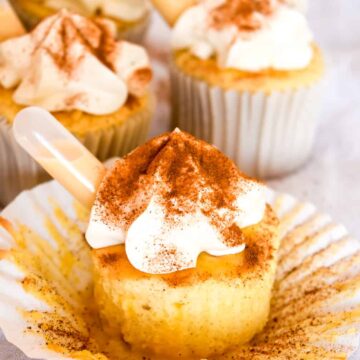