I am a firm believer that chocolate chip cookies will cure pretty much anything. Whenever I am ill, especially with a sore throat, I make a batch and indulge myself with a few spoonfuls of the dough. Maybe it is just coincidence, or maybe it is some medicinal benefit to the occasional bit of raw egg, but it has never failed to make me feel better!

Being in Britain, I have found it a bit strange how novel American style cookies are. In the traditional expat translation a cookie is equivalent to a British 'biscuit', but no one confronted with a chocolate chip cookie and a British digestive could fail to see the difference. Not that digestives aren't good on occasion, but let's face it - there is no real substitute for this American classic!

After years of simply using the recipe on the back of the chocolate chip packet, my family diverged from the tried and tested suggestions of Nestle's Toll House Morsels and embarked on new frontiers. The following recipe is the result of trial and error with converting American recipes into easy British substitutions over the years. It also incorporates a good dose of vanilla - my single favourite ingredient!

Start with preheating an oven to 175C/160C Fan (350°F) and preparing a couple of baking sheets with parchment paper or silicone mats. I've become a great fan of silicone mats especially for cookies or other batch bakes. They're excellent in preventing bakes from sticking and make for easy cleaning by simply wiping off with a damp cloth.

Over a separate sheet of parchment paper, sift your flour, bicarbonate soda and salt. Set this aside for later in the mixing process. Meanwhile, in a stand mixer fitted with a paddle attachment, beat your butter until lightly whipped. Add your sugars and beat on medium until light and fluffy. Add your eggs in one at a time, beating well after each addition. Don't forget to pause to scrape down the sides of the bowl occasionally. Then, beat in your vanilla extract.

Next, you will want to add your flour mixture. If you sifted this on top of parchment paper, this can be gathered together to form a funnel. This will allow for easy pouring into the mixer while this remains beating. It is best to reduce the mixer speed to low, to avoid sending flour flying all over the kitchen! Add slowly and beat until well-combined.

Finally, add in your chocolate chips. I've made this recipe with a wide range of chocolate morsels, chunks or chips over the years. Chopping whatever chocolate is nearest to hand works just as well as pre-made chips if you're needing a cookie fix! Mix the chocolate into the batter until just incorporated, trying to ensure the bits are well distributed throughout.

Once your dough is ready, scoop out dollops onto your prepared trays. I used an OXO Good Grips #40, which holds around 1 ½ tablespoon of cookie dough. You can also do this with a standard kitchen tablespoon. Be sure to leave a couple of inches between the cookies on the baking sheet as these will spread. Bake for around 10-12 minutes, until beginning to turn a golden colour. Remove from the oven and allow to cool for a couple of minutes on the baking tray. Then remove with a spatula and transfer to a wire rack to finish cooling. Repeat the baking process until your dough is finished. This recipe will make around four dozen. My most recent bake provided 45 cookies, minus a bit of dough eaten along the way...

If four dozen cookies sounds too many to be making in one go: firstly, you have clearly never had my chocolate chip cookies! But secondly, and in all seriousness, they do keep well. They will stay relatively fresh for about a week in a sealed container. Alternatively, if you don't want to bake the full batch, cookie dough is easily freezable. Most would suggest freezing the dough prior to baking, rather than trying to freeze the baked cookies themselves. For easiest baking options out of the freezer, form pre-measured dough balls. You can use either a scoop or a tablespoon to form the balls. Place these on a lined tray and freeze until hardened. These can then be removed from the tray and added to a freezer bag for more convenient storage. Remove and bake straight from frozen (this will take a bit longer than baking fresh). 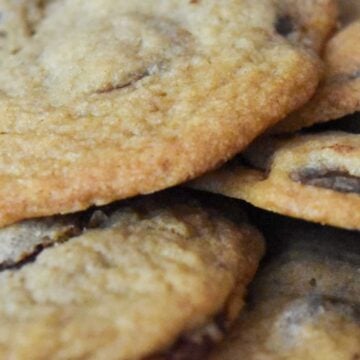