This is an easy family recipe for anise biscotti - a perfect cookie for the holidays or for any day with some coffee! The particular recipe comes down to me from my Great-Aunt Lena, who refers to these as 'biscotts'. She would normally serve them up with pizzelles for any visitor. In our family, we don't usually bake the biscotti the second time. I still have a preferance to eat them when they're on the softer side. In the recipe below, I've noted the option for the second bake if you're keen on the crunchier classic.

If you're not familiar with aniseed, it is a flavour similar to fennel or liquorice. It is frequently used as a flavouring in Italian baking. My family uses it mainly for these biscotti and pizzelles. In this recipe the anise is quite subtle. I'd highly recommend trying it, even if you're not a major fan of liquorice/fennel flavours. I personally can't stand liquorice most of the time, but still love these.

In Britain, it is quite difficult to find anise extract, so my stockpile comes direct in care packages from my parents. It can be sourced online, but might require some pre-planning as it is not readily available in stores.

As these are otherwise plain biscotti, without any nuts or fruits, you can also safely substitute pretty much any flavour into these. I've made them with both vanilla and almond extracts previously with success.

First preheat your oven to 175C/160C Fan (350°F) and line two baking sheets with parchment paper or Silpat. In a large bowl or in the bowl of an electric mixer, combine butter and sugar. Beat these together until light and creamy. Add the anise extract and eggs, beating to incorporate.

In a separate bowl, mix the flours and baking powder together. You'll want to add this slowly to the sugar mixture. If using an electric mixer, do this gently to avoid covering your kitchen in a flour explosion. If mixing by hand, I find it best to use your hands to knead the dough together following the final addition of flour. Once your dough is combined, split this into two roughly equal balls. Form these into logs and place on the prepared baking sheets. You may want to then pat these down a bit, as they will raise and expand in the oven. Bake for 30 to 35 minutes, until a skewer inserted in the middle comes out clean.

Remove from the oven and allow to cool for about 5 minutes before slicing at a diagonal slant. It is important to slice while the biscotti is still warm to avoid too much crumbling.

These are now ready to eat. You can choose to make these more properly 'biscotti' and thus twice baked. Once sliced, place the slices back on the baking trays on their sides. Bake for a further 10 minutes, then flip and bake again for 10 minutes. This will give them the more traditional crunch of the twice-baked classic. Best served with coffee or after dinner with Marsala. 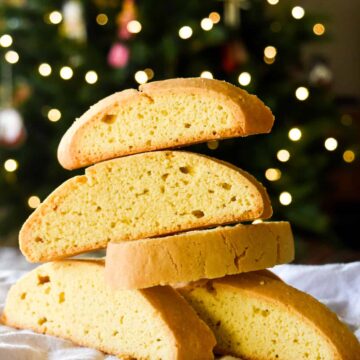