The ultimate Ferrero Rocher Brownies! These super decadent and easy Ferrero Rocher fudge brownies with Nutella are packed full of chocolate hazelnut. Guaranteed to give you at least one full Ferrero Rocher in every brownie (plus a bit in each bite!), these are sure to be a favorite!

How to Make Brownies with Ferrero Rocher

These decadent chocolate brownies with Ferrero Rocher are incredibly simple to make!

You'll want to start with preheating your oven and lining an 8" square baking pan with parchment paper. This will make your life a lot easier when it comes time to slice and serve these super fudgy brownies!

The process for making these follows the same basic steps as my other brownie recipes, such as my easy Mini Egg Brownies. In a large mixing bowl, whisk together the wet ingredients - the eggs, oil, water and vanilla extract. In a separate bowl, stir together the dry ingredients - the flour, cocoa powder, powdered sugar, sugar and salt. Add the dry to the wet and stir with a spatula until just combined.

Now press 9 or of the Ferrero Rocher into the top of the brownie batter - these should be placed equally spread 3x3 in pan, roughly in the centre of each of the 9 expected slices.

Chop the remaining 5 Ferrero Rochers up roughly and sprinkle over the top of the brownies.

Bake in the centre of the preheated oven until a toothpick inserted about an inch from the corner comes out mostly clean.

Tip: for perfect Ferrero Rocher fudge brownies, you want the toothpick to come out mostly clean - this means the batter is baked and safe to eat, but won't be solid and cakey.

Can I make brownies with Ferrero Rocher?

How long do these brownies keep?

These easy Ferrero Rocher brownies with Nutella will keep well for several days at room temperature. The fudgy brownies stay fresh for about 3-4 days - ideally in an airtight container or wrapped in plastic wrap.

These brownies can also be frozen. If freezing, allow to cool completely before wrapping in plastic wrap and placing in a ziploc freezer bag. These will keep for 3 months in the freezer. Allow to defrost at room temperature before serving (usually about an hour).

Can I make these with more (or less) Ferrero Rocher?

Yes! This recipe give you the guide to making brownies guaranteed to have a full Ferrero Rocher in each piece, plus a bit extra. If you are using leftover Ferrero Rocher from a holiday or gift, you can make this with more or less of the actual candies - this will not effect the recipe or baking.

These brownies are large, can I make this recipe in smaller bites?

This recipe has been developed for an 8" square baking pan. How you chose to cut these brownies is up to you. If you'd like to cut into smaller pieces, that is absolutely doable. I recommend cutting into 9 and then slicing each large brownie in half diagonally to give you 18 triangular pieces (each with a half Ferrero Rocher).

If you like these, try these other chocolate delights: 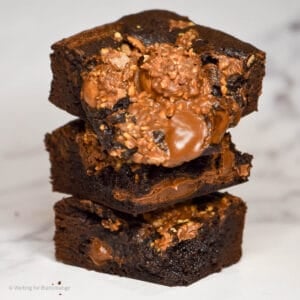 The test for a fudgy brownie is that a toothpick comes out mostly (but not entirely) clean when inserted about an inch away from the corner of the brownie pan. This means the mixture has been cooked, but remains fudgy and not cakey. A clean toothpick would mean the batter has fully solidified and the brownies will be more dry or cake like. Another key to fudgy brownies is allowing them to cool before slicing and serving. This allows the soft, semi-molten mixture to firm up enough to slice more cleanly. You can absolutely slice and eat while still warm, but this will most likely be messy if you've baked as instructed for a fudgy brownie.