This homemade cherry brandy is my grandmother's recipe and has been a family tradition for generations. Made in the summer with fresh cherries and plenty of bourbon, the resulting liquor is a Christmastime staple in our house and a perfect gift at the holidays.

Making your own homemade cherry brandy is a super simple process. All you'll need to do is add the cherries to your clean and sterile jar. Leave a little room so that you can fit your cinnamon sticks in.

Add the whole cloves (image 2) and the sugar (image 3). Then pour the bourbon over top, filling the jar up, but leaving about half an inch at the top (image 4).

Screw the lid on tightly. This does not need to be sealed in the way you would for canning, but should be as tight as possible. Once closed, shake the jar to help mix the sugar into the bourbon and invert so that the lid side is now down on the countertop.

Leave this for about half an hour, then shake and flip the jar again. Repeat this a couple more times until the sugar is completely dissolved into the liquid.

So the jar I used here is a 16-ounce classic mason jar. You can use smaller or larger jars, but will need to scale the ingredients up and down accordingly. Different styles or shapes of jars may impact the amount of bourbon you end up using as this is simply poured over the top and meant to fill the space.

The main consideration in selecting a jar for this cherry brandy is to ensure you will have a tight (airtight) seal. This is best achieved with a screw top lid. This is usually an airtight top and a band that you can screw tightly onto the jar.

The key to this brandy liqueur is the ageing. You want to leave the flavours time to infuse - the longer the better! My family has jars of this brandy that are several years old, but the general rule is to make the brandy and let it set for about 4 months.

You'll want to ensure that your cherries are submerged in the bourbon, the lid tightly sealed and the jars kept in a cool dark place.

Once your brandy has aged for at least four months, it is ready to drink! The best way to serve is in small glasses with some of the cherries on the side.

The cherries will have soaked up a lot of the bourbon and will be quite strong after 4 months maturing!

How do I make cherry brandy?

Follow the simple recipe for homemade cherry brandy below! This is an easy to follow guide for making a jar.

You can scale up or down dependent on the size of your jar or how many you want to make.

Similarly, the measurements are my personal preferences, but they can be adjusted to taste. If you like sweeter drinks or if your cherries are underripe, you may want to add a bit more sugar. If you like other spices, you can experiment! The only down side is you will have to wait a few months before you can sample your creation.

How long does homemade brandy keep?

This cherry brandy will last for years. My family has several jars from unknown dates long past.

As a general rule of thumb, I would recommend making jars (usually in the summer) and consuming 4-6 months later. If you leave the jars for a year, they should still be fine as long as they were tightly sealed and stored somewhere dark and cool.

Can I make brandy with other fruits?

Yes! While this recipe is for cherry brandy specifically, you can try other fruits.

I would recommend working with fruits, like berries, that won't require you to cut them in order to fit into the jars. This is because fruits will soften and may lose their structure during the soaking process, this will be exacerbated if they are cut up first.

Want to try out some of my other family recipes? Check out: 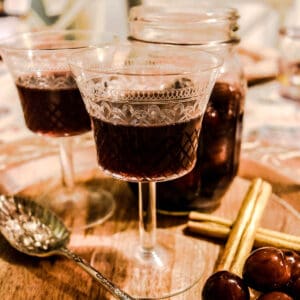 The number of cherries will depend on their size and the size/shape of your jar. The goal is to fill the jar, leaving about a half inch gap at the top and enough room for the cinnamon sticks to slot in alongside. Amounts of bourbon will also vary depending on the size/shape of the jar and the amounts of cherries you've been able to fit in. When dissolving the sugar, make sure the lid is tightly screwed onto the top of your jar so that this does not leak when inverted. As a safety precaution for spills, you may want to place on towels or in a tray with a lip. The four months aging is just a recommendation - we usually make this brandy in the summer and serve at the holidays. It can be kept for considerably longer. For more tips and helpful images, see the above post.