An easy cozy autumn beverage - make your own homemade apple cider with spices and try out a spiked amaretto cider cocktail to warm up on a cool fall evening.

Apple cider just isn't a thing in the UK - at least not in the style an American would expect. In Britain, the term cider most commonly refers to alcoholic hard cider. Spiced non-alcoholic apple cider, the kind you would buy in the US from an apple orchard, isn't generally available. In order to scratch the itch of the autumnal beverage craving, it's best to make your own!

So, as I learned a few years ago, making homemade apple cider is actually an extremely easy process. In terms of equipment, it requires:

The ingredients are pretty flexible and open to alterations for personal preference. This is especially true in terms of the spices used.

The basic ingredients for this recipe are:

What Spices Go In Apple Cider

Making your own cider has the benefit of playing around with these spices and selecting a mix of your favourites. Some great spices for cider include:

In general, it is best to use whole spices for your apple cider as using ground spices will result in extra grit that will be difficult to strain out at the end. The whole spices also infuse better and more evenly, leading to a better spiced product.

Simply toss all ingredients into a large saucepan. You will need a deep stock pot for this recipe - ideally one with a lid.

Pour water into the pot - enough to come to the top of the apples. These may float a bit, but essentially as long as the water comes to the top and covers them (if pressed down) this will be enough. The amount of water will depend a bit on the size and shape of your pot, so I have not give a firm measurement here.

Place the stock pot over a medium high heat and bring to a boil. Given the amount of water, this may take about half an hour. Stir occasionally to help the sugars dissolve and the ingredients to mix.

Once boiled, turn the temperature down to a low setting and cover with the lid. If you don't have a lid, you can also use aluminium foil over the top of the pot.

Simmer on the low setting for about 3 hours, allowing the flavours to infuse and the apples to break down.

After 3 hours, remove from the heat and strain into a bowl, removing the apples, lemon and whole spices.

This can be served warm, fresh from the stovetop or cold - allow to cool at room temperature before decanting into a pitcher or jug and storing in the refrigerator.

Apple cider is great on its own, but if you're looking for the ultimate apple cider cocktail, I've got the perfect one for you!

Rather than making a large vat of spiked cider, I prefer mixing individual glasses. This allows you to more easily serve both alcoholic and non alcoholic cider at the same event without necessarily needing to make multiple batches.

Homemade apple cider can keep well in the refrigerator for about a week. It can be served cold or reheated to suit your taste.

Can I freeze homemade apple cider?

Yes, homemade spiced cider can be frozen easily. Once strained, allow the liquid to cool completely before transferring to a freezer safe container. Leave a bit of a space at the top (don't fill completely full) as the liquid will expand when being frozen.

When ready to serve, defrost in the refrigerator overnight.

For easy access, freeze in multiple smaller containers, so that you are able to defrost small batches rather than the whole amount.

Can I use ground spices in apple cider?

While the whole spices are best in making spiced apple cider, you can use ground spices if these are all you have available. This may result in your finished product having a bit of spice that does not strain out and clusters at the bottom and of your pitcher. This is entirely harmless but a bit unpleasant to drink, so take care to pouring out into a serving glass.

If you like this recipe, try some spiced bakes to go along with you cider: 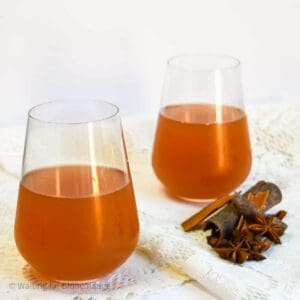