Looking for the perfect brunch? You know what they say about an apple a day! These soft cinnamon rolls with apple pie filling are the perfect way to start your day. An ode to apple pie in cinnamon bun form.

This dough recipe is inspired by the cinnamon rolls from Ambitious Kitchen with a few tweaks. They are quick, easy and delicious!

Begin by warming your milk. This needs to be lukewarm. You don't want to kill your yeast with boiling milk, but you also don't want to leave it inactive with too cool liquid. There is a sweat spot around 113°F (45C), plus or minus a few degrees.

I warm my milk in a small saucepan until simmering, then remove this from the heat and allow it to sit for about 5-10 minutes to cool. You can test this with a food thermometer or your finger - it should feel pleasantly warm, but not too hot to touch. Then sprinkle the yeast over top along with 1 teaspoon of sugar. Stir this together and leave for another 10 minutes until the yeast is foamy.

Meanwhile, add your flour, salt and 2 tablespoons each of granulated sugar and brown sugar, to the bowl of an electric stand mixer fitted with a dough hook attachment. Give this a stir.

Once the yeast is ready, add this to the flour mixture, immediately followed by ¼ cup of softened butter and the eggs. Knead this until it comes together into a dough. Then continue kneading for a further 10 minutes until the dough is pulling itself away from the sides of the bowl.

Transfer the dough to a large bowl lightly greased bowl. Cover with cling film and sit in a warm place for 90 minutes until doubled in size.

While your dough is proofing, prepare your apple filling. This is essential, because you will need to cook the apples down a little and will want them to be cool before trying to fill your buns.

Simply place the chopped apple pieces in a saucepan along with the remaining sugars and the ground cinnamon. Stir these to coat the apples and bring to a simmer over a medium heat.

Cook for 10 minutes so that the apples release their juices. Then, drain the apples, but reserve the juices. Place the apples in a small bowl and the reserved liquid back into a saucepan.

Return the saucepan to the stovetop over a medium heat. Boil the cinnamon apple liquid for about 10 minutes - this will help create a thick caramel-like syrup. While warm, this won't seem thickened, but as it cools it will solidify a lot! Set this aside while your dough finishes proofing.

When your dough has finished rising, tip this out onto a floured work surface. It should be pretty soft and easy to pat out into a rectangle. Use a rolling pin to expand the rectangle to about 9" by 15". It doesn't really matter which direction is the long direction, but I like to make mine horizontal since I find this easier to roll up in the end.

Dollop bits of softened butter over the top and spread out as evenly as possible to give a nice layer. Then top by sprinkling over the chopped cooled apples and drizzle the apple cinnamon caramel. If the caramel has hardened up, simply reheat until it returns to a more liquid consistency.

Once the fillings are spread over the top of the dough, roll into a log from the short side (in the case of my rectangle pictured, I rolled from left to right).

Use a dough cutter or sharp knife to cut off the uneven ends - these won't have much filling, so are better removed than used for your buns! Then slice into 9 equal rolls.

Place these into a parchment lined baking tray - you'll want either a 9" square or a 9" round cake pan. These need to fit relatively snuggly so that they rise and bake to make nice pull apart cinnamon buns.

Cover the buns with a clean tea towel and leave in a warm space to rise for an hour. Meanwhile, preheat your oven.

Once the buns have finished their proof (and roughly doubled in size), bake in the preheated oven until just going golden. To ensure they're nice and soft, you don't want to over bake so keep an eye and remove once they start to brown on top.

Once the cinnamon rolls come out of the oven, let them cool in the tray for about 10 minutes before frosting.

You can use all sorts of icings for these cinnamon buns. I know that cream cheese frostings are always popular. But, for these apple pie cinnamon rolls, I recommend a simple vanilla topping - a bit like a classic apple strudel.

These buns are best eaten warm from the oven, but leftovers can last for a day or two stored in an airtight container at room temperature. I wouldn't recommend refrigerating as this will stale them faster.

What is the best way to have these ready to bake for breakfast?

The best cinnamon buns are fresh baked on the morning! This recipe can be made up to the step of forming the buns (for the second proof) the night before. This way they'll be perfect to pop into the oven in the morning.

Once you have filled and formed the buns, and placed these into the tray as directed, cover and store in the refrigerator overnight. The following morning, remove from the refrigerator and set in a warm space for about an hour while you preheat your oven. Then bake and finish as normal.

I drained my apples, but there is liquid in the bowl of chopped apples after cooling - is this normal?

Yes - don't worry! The apples continue to release juices as they cool, so there will likely be a little in the bowl when you come to sprinkle the apple pieces over the dough. Simply discard this excess juice as you don't want your filling to be soggy!

If you like this recipe, check out some more brunch and bread inspiration: 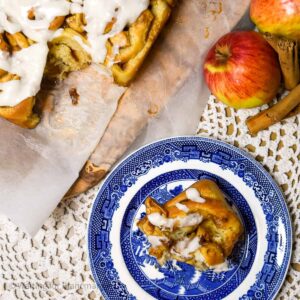