My small batch cherry preserve is a quick and easy jam recipe with a light cinnamon spice. This fresh cherry jam can be whipped up in less than half an hour and stored for weeks in the refrigerator.

You may have gathered, I'm a massive fan of small batch preserves. I discuss the benefits of these further in my post on small batch strawberry jam.

While I love the idea of making large vats of jams and jellies, the fact is that I don't have enough jars or enough storage space to really do justice to a full jam stockpile! So, instead of holding an epic canning session, I get my jam making fix by preserving smaller batches of fresh fruits.

Types of Cherries for Jam

As with any fruit, you can use just about any type of cherry for a jam. This will mostly depend on your personal tastes and availability.

In Britain, many cherries are cultivated and sold at markets, but it is rare to find much selection in the grocery stores. For my easy cherry jam, I've opted for a seasonal sweet variety that I happened to pick up.

This recipe can be made with any conventional sweet cherry variety, such as Bing or Sweetheart.

You can substitute fresh cherries for frozen pitted cherries in this recipe.

While the fresh fruit will provide a richer flavour, using frozen cherries may be more convenient and does allow you to make fresh jam outside of the fruit's conventional season.

This is an easy five-ingredient recipe:

A Few of Tips on the Cherry Jam Ingredients

You will want your cherries pitted and cut into halves.

The 5oz called for in this recipe is roughly 25 medium sized cherries (1¼ cups) after they have been pitted and halved.

I opt for halving my cherries, but you could quarter these or cut them into smaller pieces depending on how you prefer your jam texture.

As with any jam or preserve, the key is in the ratios. You will want to use roughly the same amount of sugar to fresh fruit and enough pectin to help set this.

Citrus juice helps to add natural pectin while also sharpening the fruit flavours in the jam. Orange cherry jam is a nice pairing, accentuating the cherry without overpowering it.

I always like to include cinnamon with cherry as well. Add a cinnamon stick while your jam is boiling. This will help infuse the warmth of cinnamon into the jam, offering a light spice.

If you don't have a thermometer, you can also use the freezer plate test to check that this is setting:

I like to cool my jam in a large baking tray to help speed up the cooling process a little bit. This isn't entirely necessary though, and you can decant straight into a heatproof container or jar for storage.

How long does this cherry jam keep?

This cherry preserve can be kept in the refrigerator in an air tight container easily for a couple of weeks. It can also be canned for longer term preserving, though properly canning 1 cup of jam may not be worth the hassle!

Can I freeze cherry jam?

Yes, you can freeze fresh cherry jam without issue. Allow this to cool and set before placing in the freezer in a freezer safe container or ziploc bag. It can be stored for several months this way. If you have used frozen fruit to make your jam, it is not recommended to refreeze these.

I don't have an orange, can I use orange juice or another alternative in this recipe?

If you don't have a fresh orange, never fear! You can either use about 2 tablespoons of orange juice or the juice of a lemon for this recipe.

My jam hasn't set, can I fix this?

This happens to everyone! There are a couple of options to salvage a runny jam situation. These depend a bit on what you intend to use the jam for.

If you were just using up cherries and not wedded to a particular final product, you can use this as a sauce, as is. The flavour will still be delicious. It will go well as a topping for ice cream, yogurt or panna cotta, with a bit more of a compote consistency.

If you need a more set jam, you can also return this to your pan and return this to heat. Most likely, if your jam hasn't set, it is because it didn't reach the required temperature for setting, which is about 220F/105C. You can try to bring this back up to the requisite temperature, though you do risk the jam cooking too long and becoming unpleasantly solidly set (almost caramel-like).

If you like this recipe, try these other small batch preserves: 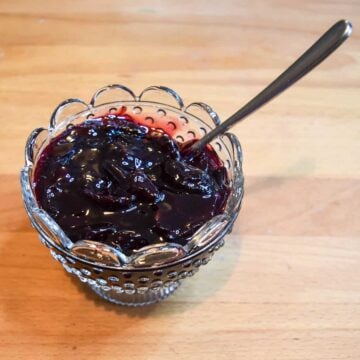