Do you love potato chips? I'm a huge chip (or as they say in the UK, 'crisp') fan! And I shamelessly look for ways to add them to my recipes. My new potato chip brownies are a fun twist on a classic fudgy chocolate brownie, with a layer of potato chips baked right in.

For the potato chip layer - simply crush the chips and then stir through the brown sugar. This can be done similar to rubbing a streusel or crumble topping together, using your hands to mix and coat the potato chips in the sugar.

Set this aside until you're ready to put together the brownies for baking.

This brownie dough is very straightforward. Begin with preheating your oven and lining an 8" square baking pan with parchment paper. This lining will make removing the brownies to slice significantly easier once they're ready!

Pour half of the mixture into the prepared baking tin, use an offset spatula or knife to spread an even layer into the corners. Then top with the potato chip sugar mixture and then the remaining brownie batter.

For the top layer of batter, gently nudge the brownie mixture over the chips - these will be loose, so spreading will cause them to move about. You want to try avoiding mixing the chips into the batter too much, but you also want to have an even brownie layer on top.

Add some extra smashed potato chips to the top and bake!

As with my other brownie recipes, one of the keys to a fudgy chocolate brownie is the slightly underbaked texture. In order to achieve this, you need to bake until a skewer comes out mostly clean. Then, the most important part: let the brownies cool!

You want to let these potato chip brownies cool for at least 2 hours to ensure that they've firmed up enough to cut easily, while maintaining a nice fudgy texture.

How long do these potato chip brownies keep?

Brownies with potato chips are best eaten on the day they're made for the best flavour and freshness. They can last for a couple of days, kept at room temperature in an airtight container. The chips, however, will begin to stale the longer they are in the batter.

These brownies with a layer of potato chips baked in will taste like a fudgy chocolate brownie sandwiching a thin layer of crisp chips with a crunch of salty crushed potato chips on top.

Can these brownies with chips be frozen?

While brownies and potato chips can both be frozen, I would not recommend freezing this particular recipe. The wait for these to cool completely prior to freezing and then the subsequent need to defrost, risks the chips becoming stale and less pleasant.

If you like this recipe, try some of my other brownies and bars: 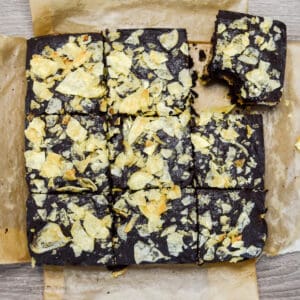 When adding the top layer of brownie batter, it is best to spoon dollops of the batter over the top of the potato chips. Because the potato chips are loose, they are liable to be picked up and mixed into the batter, which is not the goal. Instead, you want to try to add the brownie layer without too much disturbance. Nudging dollops of brownie dough will be easier than trying to spread out from one place.