If you're looking for the perfect easy frosting for a cake or an icing that can hold its own in decorating, look no further than American Buttercream. Three ingredient frosting with a fantastic flavour that can top anything from a super simple family bake to a grand showstopping masterpiece.

Which Buttercream Should I Use?

To decide on which buttercream will be best for you, there are some questions you should ask:

Everyone has their preference, but for me American buttercream is my fave - it is very straightforward to make, easy to flavour, holds more vibrant colour and is simple to use for piping.

For most of the cake decorating I do, I enjoy piping work, so being able to colour and pipe the buttercream is a high priority. The American version will provide the sturdiest of standard buttercreams for a smooth but solid setting decoration.

This is not to say that meringue based buttercreams don't have their place. I find that they tend to offer a more pillowy finish. This may be the consistency you are looking for in some cases, especially for a light topping to a cake or for filling filling. The lightness can be a great addition to denser cakes or cupcakes.

Meringue-based buttercreams do have some drawbacks in terms of process and finish.

I've made the recipe below using conventional American cup measures, but if you have access to a scale, the ratios are even more straightforward.

In the US, traditionally, cup measures are used in baking. I still prefer to use them in most of my recipes since my classic cakes like poundcake have been passed down to me in cup measures. Icing is the one recipe that I have very thoroughly adopted weight measures for, as this allows me to scale up and down the recipe really easily by ratio.

Nonetheless, to make a batch of vanilla American buttercream, the cup measure ratios for this are:

This will yield enough to frost the top and sides of a conventional 9" round cake generously.

In the UK, using scales for weighing ingredients is more common than cup measures. Everyone fills and levels their cup measures slightly differently so for baking weights is often a more accurate method. Measuring ingredients and ratios in weight will offer more precision than the cup.

My ratios for buttercream in weight are extremely straightforward

Should I Add Milk to Buttercream?

The question of milk in buttercream is generally dependent on consistency. Is your frosting already spreadable and/or pipe-able in the way you need? This may be a different answer for different parts of your decoration or on different occasions due to environmental factors.

If you are only spreading icing, the consistency can be a bit thicker, but if you are piping you may need to thin this dependent on the size of the tip. For instance, when piping small dots or words, I will use a Wilton #1 or #2 tip which is very narrow. This means that the icing needs to be a little thinner to ensure that it comes through smoothly without getting jammed.

You may want both thinner and thicker icing for different parts of your design. Separate the icing prior into bowls prior to adding any milk. This will enable you more control, adding smaller amounts to the separate bowls based on the need.

Some environmental factors to consider in using milk are heat and humidity both outside and in your kitchen. For example, I use less milk in my frostings in the summer as the heat means the butter is softer at the start. This yields a thinner and smoother frosting than in the winter, without any additional milk. In the winter, as it is cooler, the butter stays more stiff, making my frosting harder to pipe without a bit of milk.

If you would rather not use milk in your icing at all, you can also use a tiny bit of boiled water to thin the frosting in the same way. This may be preferred in the summer if you are concerned about adding extra dairy on a hot day.

You can keep all butter buttercream in a cool place on the counter for a day, in the refrigerator for about a week or in the freezer for months.

If you opt to use a non-butter substitute for some or all of the butter in this recipe, you may be able to keep it on the counter longer.

It is always best to keep cakes with buttercream in cool places out of direct sunlight.

All of these cakes and cupcakes are frosted and decorated entirely with this recipe. 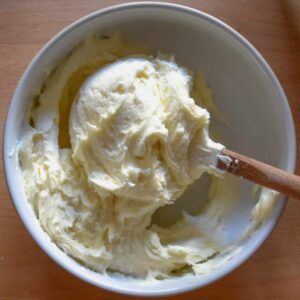