In the UK, they don't have Cool Whip! As an American, this was a culture shock too far for me. I've spent quite a long time working out the best alternatives for classic Cool Whip, both as a topping and as an ingredient. An easy stabilized whipped cream is essential as a topping and is surprisingly simple to achieve.

What is Stabilized Whipped Cream?

Stabilised whipped cream is quite simply whipped cream that will hold its shape. It can often be firm enough (and stable enough) to pipe and will last for a few days in the fridge.

The key to stabilising whipped cream, is adding a thickener. Some recipes will call for cornstarch or cream of tartar. I prefer to thicken mine with powdered sugar alone. This keeps the flavour a bit sweet and simple. It also makes for a super simple ratio: 1 tablespoon of icing sugar per cup of cream.

Tips and Tricks for Whipping

Whipping with an electric mixer is the easiest - either a stand mixer or a handheld device. You can off course whip purely by hand, but this will take a lot longer and a lot more arm and wrist muscle!

How to Tell You Have Whipped Enough?

It takes some trial and error when you're starting out to ensure you've whipped your cream to the optimum thickness.

You can use all variety of flavourings in your whipped cream. My favourite is vanilla extract or vanilla bean paste. This is the best way to get the flavour you may be seeking from a cool whip substitute.

Alternatively, you could flavour your whipped cream with different extracts - almond makes for a nice compliment to the cream.

Zests (such as lemon or lime) or spices (such as cinnamon) can also be used to provide flavouring. If you are wanting to include zest or spice, I would add this towards the end of the whipping rather than at the start.

My whipped cream is melting, how can I fix this?

If your cream is runny and not holding shape, this is because it has not reached stiff peaks and is not thick enough. Continue whipping! It can take 5 to 10 minutes of using an electric whisk for you to reach stiff peaks.

How long does cream keep?

Stabilized whipped cream can stay fresh and hold its shape for a couple of days in the fridge. If you are using this for an occasion, you can make this up to a day in advance and should still be in peak condition. Keep this in the fridge in an airtight container.

Stabilized Whipped Cream is a Great Accompaniment to:

Other Baking Basics You May Find Useful: 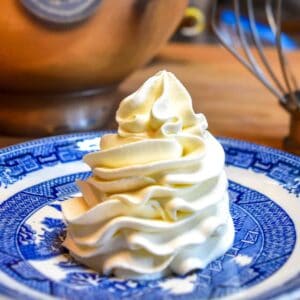