This small batch raspberry cinnamon roll recipe is perfect to make a few heart-shaped buns for an extra special brunch treat! Cinnamon dough with an almond raspberry filling and topped with a quick and easy almond cream cheese frosting.

This recipe is split into three parts:

So you may notice that many recipes will call for frozen raspberries. These may be more convenient to use depending on your location and the season.

I would normally recommend fresh raspberries for the best flavour, but you can certainly substitute with frozen raspberries in this recipe.

To use frozen raspberries, allow them to defrost first. Frozen fruits are often softer and will break down more easily, so these are likely not to require as much smashing as the fresh.

This is an incredibly simple three ingredient spread:

How to Make These Easy Raspberry Rolls

Start with the dough for these buns. You'll need to activate the yeast first, by sprinkling this over top the warmed milk along with the granulated sugar. Stir this together and let it sit until frothy.

Place the dry ingredients to the bowl of a stand mixer fitted with a dough hook. Then add the foamy activated yeast, immediately followed by the egg and the butter. Begin kneading at a low setting until the dough comes together. Knead for about 15 minutes until the dough is pulling itself off the side of the bowl.

Transfer this cinnamon dough to a greased bowl, cover with plastic wrap and allow to sit in a warm place at room temperature for between 90 minutes and two hours until doubled in size.

While the dough is proofing, you can make your raspberry filling. Simply smash the raspberries with a fork, add the cornstarch, cinnamon and almond and stir together.

You can make this a day in advance of filling the buns (just keep in the refrigerator until needed).

After the first proof, turn the dough out onto a clean work surface, knock back and roll to a roughly 11" square.

Spread with softened butter to within about an inch of the edges and then spread the raspberry filling over about three quarters of the buttered section of dough starting from the left side, leaving about a quarter without filling on the right hand side. Then roll from the left to right.

The gap in filling on the right is because the raspberry filling will be pressed out while you roll up the dough. Leaving some uncoated will help keep the filling inside the buns.

Once rolled, slice about 1.5" off each end to remove unfilled and uneven dough. Then cut into 9 equal pieces with a dough cutter. These will be nine mini cinnamon buns, which can then be fitted into heart shaped pans to create 3 large heart shaped buns.

After placing in the heart-shaped pans, cover with a clean tea towel and allow to proof for a second time for about 90 minutes.

When ready, bake at 350°F for 20 minutes until risen and golden.

Alternative Shaping for these Buns

This recipe is scaled specifically to provide three large heart shaped buns. This is roughly half a batch of conventional sized cinnamon buns.

But, if you don't have heart shaped cake tins, never fear! You can easily make these raspberry cinnamon buns in a variety of alternate baking trays. Using the same recipe, you can use a 7" round cake pan or another similar sized baking dish.

By doubling the recipe, you can make nine larger individual buns following the basic process outlined in my Apple Pie Buns recipe.

When it comes to frosting raspberry rolls, you have many options! For this recipe, I recommend my easy spreadable cream cheese and almond icing. Simply stir the ingredients together and spread or pipe over the buns.

Alternatively a simple vanilla glaze of powdered sugar, milk and vanilla would go well. Or, you could amp up the raspberry by using a bit of raspberry juice or puree with icing sugar for a quick and easy raspberry icing.

How long do these raspberry rolls keep?

Well, when dealing with a brunch classic, you can't really beat eating them fresh! Leftovers can keep for a couple of days, though I'm not going to lie, they won't be as good as on the day they're baked.

If you frost with the cream cheese frosting, you should also store in the refrigerator if leaving overnight, which can contribute to the buns drying out more quickly.

How do I make these homemade buns so they are ready for breakfast or brunch?

Given the proofing required and the desire to eat them fresh, you might be wondering: how do I make cinnamon buns for breakfast without waking up insanely early?

Well, you're in luck! These buns can be slow proofed for the second proof - this means, you can complete all the steps, fill and fashion the buns the day before. Cover lightly with cling film and place in the refrigerator overnight.

The following morning, take out of the fridge and allow to come to room temperature for about an hour before baking. Saves you loads of time and 4am alarm clocks!

Can I make this recipe nut free?

Of course! If you're needing this to be nut free or just not an almond fan, simply leave out the almond extract. You can replace this with vanilla for a nut free version, or even add a bit of lemon extract to give a zest.

If you like this recipe, try out some other brunch bakes: 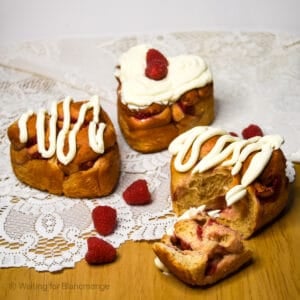 This recipe can be made in other size pans. See the blog post above for suggestions. In general, you are looking for any baking tin that allows the buns to sit together with a bit of room to grow. They go through a second proof and then will rise further in the oven, so you do not want them super tightly packed at the stage of adding to the pan.
Tried this recipe?Mention @waitingforblancmange or tag #waitingforblancmange!