We have a pretty gigantic bay tree in our back garden. Over the past year, it grew out of control and started to block the sunlight to our tiny backyard. A couple of months ago, one of our neighbours helpfully offered to clip it back for us. On a cold, dark December evening, he propped a ladder into the tree, climbed up with a saw and sliced off the worst offending branches. The job was incredibly quick, but succeeded in getting light back into our garden patch. A side effect has been a ridiculous amount of bay, which we will be working through for the foreseeable future. So consider this the first in a series of bay-baking recipes: my blackberry bay donuts!

Ingredients for this Bay Adventure

I've been giving a lot of thought to infusing flavours into basic ingredients. Vanilla sugar is a classic example of flavouring a cupboard staple - easily accomplished by adding a scraped out vanilla pod to a jar of sugar. It is a great way to get the most out of your vanilla beans, rather than discarding the pods after use.

For bay, it is not uncommon to add the leaves to a soup or a cream sauce as you cook, infusing the flavour into the dish and then removing the leaves. For these donuts, I opted to try the same fundamental process for the cream that is incorporated into the batter.

In a small saucepan, over a medium low heat, I warmed the half a cup of heavy cream with six bay leaves. To help get the most of the flavour, I folded these up a bit and stirred them through the mixture. I continued to stir occasionally for about 15 or 20 minutes - letting it simmer but not boil. I then removed this from the heat and left the cream to cool, with the leaves still in the liquid. Once room temperature, I removed the leaves and then used the infused cream in my donut mix.

The main event in making my blackberry bay donut dish is the blackberry bay syrup for the glaze. This is a super easy flavour infusion - adding bay leaves to blackberries as these cook down into a syrup.

In a small saucepan over a medium heat, add about a cup of blackberries with a tablespoon or two of sugar (to taste) and about four bay leaves. I again crumple the leaves to help release their flavour and stir these through as the blackberries begin to cook down. To compliment the donut spicing, I also added a pinch of cinnamon and nutmeg to the syrup as it cooked.

Allow the mixture to simmer for about 15 minutes, mashing the blackberries to ensure these release their juices. Once ready, remove from the heat. As this will be used for the glaze, I strain the syrup, so that this will be smooth. Set this aside to cool.

These donuts follow the same basic recipe as my eggnog donuts, which are super easy to whip up!

Start by preheating your oven (to 350F or 175C/165C Fan) and preparing your donut moulds. As with any baked donut recipe, this could also be made in a bundt cake pan as a donut cake. But, as much as I love a bundt cake, where is the donut fun?

Transfer your batter into a piping bag or sealable plastic sandwich bag. Cut off the end (or corner) and pipe around your moulds until they are about ¾ full.

Place your donut moulds in the centre of the oven for about 20 minutes. You are looking for these to rise a bit and go lightly golden. A toothpick inserted at the thickest part of the centre donuts should come out clean. Once baked, remove from the oven and allow to cool for a few minutes in the tin. If using silicon moulds, it is important to let these cool down a bit before unmoulding. If the silicon is still warn, this might stick a a bit to your bake. After unmoulding, transfer to a wire rack to cool completely before glazing.

For the glaze, simply whisk together your powdered icing sugar and syrup in a small bowl. The measurements for this will depend on the consistency you are seeking to reach. The measurements provided should be sufficient for coating the tops of your donuts. However, if you would prefer this thicker, simply add a bit extra icing sugar. Likewise, if you need a thinner consistency for any reason, add a bit extra syrup. If you've run out of syrup, some milk will also do the trick to thin this out.

When ready to glaze, hold the bottom of your donuts and dip the tops into your glaze to coat. Alternatively, you can drizzle this across them or use the glaze as a dipping sauce. Can you tell, I've given the glaze a lot of consideration? In any case, once glazed, these blackberry bay donuts are officially ready for consumption! 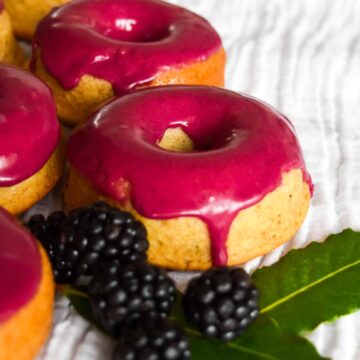 Ingredients for the Donuts

Ingredients for the Glaze

Instructions for the Blackberry-Bay Syrup