Tis the season for eggnog! These super easy baked eggnog donuts with an eggnog glaze are basically an edible version of the classic drink. Think of them as eggnog in cake form. If you can't get enough of eggnog, this time of year, then they are definitely worth a try.

Eggnog is probably my favourite festive drink, but sadly one that is difficult to come by in Britain. For several years, I've relied on Starbucks Eggnog Latte's and some pretty terrible tinned eggnog, which is more like a gelatinous custard in consistency. This year, however, I finally opted to make my own. Now have no idea why I put it off so long! I used the recipe from Simply Recipes with a few minor adjustments, such as doubling the cloves and extra cinnamon. After making it a couple times to have as a drink, I thought it might be fun to try it in some recipes. Thus, these donuts were born!

For this recipe, you can of course just use store bought eggnog. The pasteurised and refrigerated version found in American grocery stores would work just fine! If you don't have access to pre-prepared eggnog, I'd highly recommend giving the Simply Recipes version a try. You can halve it and leave off the alcohol if you are making it for only these donuts. It will still provide enough for the donut batter, the glaze and a glass to drink alongside. I have not tried to make my donut recipe with tinned, long life eggnog. I would be hesitant to try this mainly because the consistency is considerably thicker. It would likely need to be thinned down first before using.

For baked donuts, you'll need a mould. Most baked donut recipes (including this one), can be made as a giant donut/bundt cake instead of single-serving donuts. I've found standard donut moulds to be a worthwhile piece of equipment though, if you like the occasional donut!

If you're in the market for donut moulds, I'd highly recommend silicon for their ease of use. They do not require greasing or flouring and are usually much easier for unmoulding the donuts at the end.

You will also want a piping bag or a plastic bag and scissors. These will help with filling the moulds more cleanly.

How to Make Baked Eggnog Donuts

The recipe itself is super easy! First preheat your oven (to 350F or 175C/165C Fan) and prepare your baking tin (whether that is the donut moulds or a bundt cake ring). In a medium bowl, mix together the flour, baking powder, salt and spices. In a separate large bowl, cream or beat together your butter and sugar. Add your eggs one at a time, followed by your vanilla. Then, slowly incorporate the dry ingredients into the butter mixture, careful to fully blend together. Finally, slowly add in your eggnog - mixing continuously until combined.

Once you have your batter, the easiest way to fill donut moulds will be to pipe this - trust me it is a lot less messy than trying to spoon it in! If you fill a piping bag with your batter, cut off the tip to about 1.5cm width and pipe around the moulds, filling each about ¾ full. If you don't have a piping bag, a plastic sealable bag works just as well - fill this and cut off a corner in the same way as a piping bag.

Place your donut moulds in the centre of the oven for about 20 minutes, until risen, lightly golden and a toothpick comes out clean. Dependent on your oven, you may wish to rotate your trays halfway through to ensure even baking. When ready, remove from the oven and allow to cool for a few minutes in the tin. I allowed mine to cool for about 10 minutes in the silicon mould as this made the unmoulding easier, but you may find other trays required less time if you have greased and floured these.

Allow to cool on a wire rack before glazing.

For that extra touch to your super easy baked eggnog donuts, I'd recommend a glaze. Just in case the donut wasn't enough eggnog for you, I've paired mine with an incredibly simple eggnog glaze. This is just icing sugar and more eggnog. Mix the two until you reach a consistency you're happy with. As a guide, I used about ½ cup of powdered icing sugar, then whisked in a tablespoon or two of eggnog slowly, until this formed a consistency that was thin enough to dip my donuts into and coat the tops. If you over add eggnog, you can always thicken this by adding a bit more icing sugar.

You could add a touch of bourbon or other liquor for a bit of a kick, in line with the traditional eggnog cocktail. If you're doing this, you will not need as much eggnog for creating the glaze consistency. Also, as this is the glaze, be aware that you will not be cooking off the alcohol that you have added.

If you like this recipe, try these other eggnog treats: 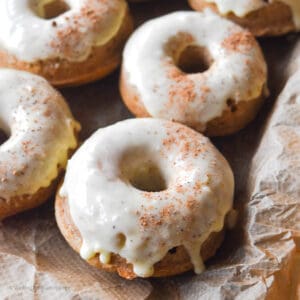 Ingredients for the Donuts

Ingredients for the Glaze