Who loves banoffee? If you're a fan of the caramel banana combo, these banana cinnamon rolls are for you! Super soft banana brioche dough with a dulce de leche caramel filling, topped with vanilla glaze and a brûlée banana slice. A sticky sweet banoffee brunch treat.

For the Banana Brioche Dough

The filling for these sticky banana cinnamon rolls is simply two ingredients:

How to Make Banana Brioche Dough

This recipe follows a very similar process to my other overnight Brioche Cinnamon Rolls.

You'll want to start with sprinkling your yeast over your warmed milk. Add a teaspoon of sugar, stir together and set aside for about 10 minutes until foamy.

Meanwhile, place the flours, brown sugar and salt in the bowl of a stand mixer fitted with a dough hook. Give this a stir.

When the yeast is ready, add this to the flour, immediately followed by the egg and the ripe banana. Tip: there's no need to mash the banana first - this should be soft and ripe enough that the dough hook will take care of breaking it down as the machine kneads the dough. Just break off pieces and add to the flour. If you're worried that your banana is a bit on the stiff side, you can mash this first before adding.

Knead the dough on a low setting for 15 minutes until it is beginning to pull itself away from the sides of the bowl. Like my other brioche doughs, this will be a sticky dough and most likely won't pull itself completely clean.

While you continue kneading, add the softened butter in bits, about a tablespoon at a time. Once this is all added to the dough, keep kneading for a further 15 minutes until it is again pulling itself from the sides of the bowl.

Scrape into a greased bowl and cover with plastic wrap. Refrigerate overnight to proof (or about 8 hours).

Rolling and the Second Proof

After your dough has its first proof, remove this from the fridge and scrape out onto a well floured work surface. Press the dough into a rough rectangle and then roll out to be about 12" wide by 15" long.

Tip: I always recommend these measurements, but they're just a guide. The width shouldn't much exceed 12" as this is will become the log that you will divide into 9 rolls. The longer you are able to roll the dough the more layers you will have in your roll. Don't roll too thin - avoid rolling thinner than ¼".

Spread the caramel in a layer over the surface of the dough and sprinkle with the ground cinnamon. Then roll up from the bottom to the top.

Using flavorless dental floss or a thin kitchen string/wire trim the ends of the dough log (about an inch or two) to remove uneven bits. Then divide into 9 rolls. Place these in a parchment lined square baking tray and cover with a clean kitchen towel. Proof at room temperature for 2 hours, until doubled in size.

When nearly done the second proof, preheat your oven to 350°F (175C/155C Fan). I also like to make a quick egg wash - beat an egg with a dash of milk and brush over the proofed rolls. This is entirely optional, but will give a more glossy finish.

Bake the rolls in the centre of the preheated oven for about 30 minutes - until risen and golden. Tip: the caramel filling will make these a stickier bun than some of my other cinnamon rolls and they'll need a little extra time in oven as a result.

Once baked, remove from the oven and allow to cool for about 10 minutes while you prepare your topping.

For these topping you'll need:

Simply whisk together the powdered sugar, milk and vanilla to form your frosting. This will be drizzled over the rolls.

Sprinkle the slices of banana with your sugar. Then, using the broil (grill) function in your oven, broil the sugar until this begins to melt down, crystalize and darken into a burnt top - like the topping of a creme brûlée. Tip: you can also achieve the same with a kitchen torch if you have one available.

When the rolls have cooled for about 10 minutes, drizzle the frosting over and top with your brûlée banana pieces.

Can I make cinnamon rolls with banana?

Yes! This is a recipe for a banana and caramel cinnamon roll. The dough itself is a banana brioche, using a fresh ripe banana in the brioche bread dough.

These banana and caramel cinnamon rolls are best eaten fresh. They are a sticky cinnamon roll with the dulce de leche filling. This means that as they cool they will shrink back on themselves more than some of the other rolls and risk developing a bit of a soggy bottom.

That said, I've certainly eaten these leftover - a day or two after baking. To preserve as much freshness as possible, wrap in plastic wrap once cool.

Well in this recipe, I use a simple vanilla frosting and some brûlée bananas. This recipe would also work well with a cream cheese frosting, like my maple cream cheese cinnamon roll glaze used for my Blueberry Cinnamon Rolls. 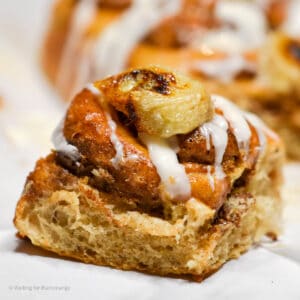 Instructions for Filling and Rolling

Instructions for Baking and Topping

This recipe calls for an extra egg for an egg wash. An egg wash is simply an egg (either whole egg or egg yolk) beaten together with a splash of milk. This can then be brushed over the rolls right before they go in the oven. It will help make them more glossy and golden, but is entirely optional and won't impact the overall bake or flavor. When it comes to activating the yeast, the warmth of the milk is important - too cold and the yeast won't liven up; too hot and you might risk killing the yeast. The sugar will also help to activate the yeast. If the mixture does not become foamy at this stage, it is possible that the yeast is dead and you may wish to start over, instead of risking getting too far through the stages in this overnight bread. Your banana should be very ripe - like a normal banana bread level of ripeness. It shouldn't need to be pre-mashed here since your dough hook will beat it and mash it plenty during the kneading. If you're worried that it's on the stiff side of ripe, you can mash this in a bowl with a form before adding to the flour.