Just like other cinnamon rolls, these sticky sweet buns can be divided into two main parts - the dough and the filling.

For the Brioche Cinnamon Bun Dough

The filling for this recipe is four simple ingredients:

How to Make Brioche Dough for Cinnamon Rolls

The process for making the dough for these rolls follows similar steps to my mini brioche bun recipe.

Begin by heating your milk to the desired temperature. This can be done in the microwave or on the stovetop in a small pan. Having lukewarm, but not steaming hot milk is important to provide the yeast with a good activation. The ideal temperature is around 104°F/40C, but temperatures up to about 115°F/45C are also fine. I heat my milk until simmering and allow to cool for a few minutes before adding yeast.

Once the milk is warmed to a good temperature, add a teaspoon of sugar and your yeast. Stir and set aside for ten minutes to allow the yeast to become frothy.

Place the flours, remaining sugar and salt in the bowl of a standing mixer fitted with a dough hook. Give this a stir.

Once the yeast is ready, add this to the flour mixture, immediately followed by two whole eggs and one egg white. Reserve the remaining egg yolk to create an egg wash later. This should be placed in a small bowl, covered with plastic wrap and stored in the refrigerator until ready to use (as you won't be making the egg wash for several hours at this point!).

Turn the mixer on a low speed and knead until a dough forms and is pulling itself away from the sides of the bowl. This takes about 15 minutes.

When you have your base dough, you can start adding the butter to enrich this for the traditional brioche. This should be added in small bits slowly to incorporate well into the dough. I add about a tablespoon at a time, cut into roughly .5" cubes.

Once all the butter has been added, continue to knead on a low setting until the dough is again pulling itself off the sides of the bowl. This will take about 15 minutes.

The dough with the added butter will be very soft.

The first proof is also the long proof, which can be done overnight in a refrigerator. You'll want to grease a large bowl with butter (you can use oil, but I like to use butter for consistency with the butter in the brioche dough).

Scrape the dough out of your mixing bowl and into your greased bowl. Cover in plastic wrap and place in the refrigerator for about 8 hours (or overnight) to slowly proof. This allows for the enriched dough to develop. It should double in size.

After the first proof, remove the dough from the refrigerator. Line a square baking pan with parchment paper and dust a clean work surface with flour.

Start by turning the dough out onto your floured surface and gently pressing into a square. Then, using a rolling pin, roll the dough into a large square, roughly 12" by 12" and about ¼" thick.

Dot small blobs of softened butter over the surface and then spread out using a spatula or butter knife.

In a small bowl stir together the brown sugar, cinnamon and pecans. Sprinkle this mixture over the surface of the buttered dough. It should provide a generous coating.

Roll the dough into a log. As it is a square you can start from any side, but I recommend rolling from the bottom, moving upwards, to keep good and even control. The tighter you're able to roll, the more rings of cinnamon mixture each bun will have.

Now that you have your brioche cinnamon roll log, you need to cut this into your nine buns. This can be achieved with a sharp knife or dough scraper, or with dental floss.

First cut off about an inch or an inch and a half from both ends. This removes the uneven ends where there will be less filling.

Then cut 9 buns, each about 1" wide. Place these into your lined baking tray in three rows of three.

Cover the pan with a clean kitchen towel and allow to proof at room temperature for about 2 hours until doubled in size.

Once doubled, whisk together your reserved egg yolk and a tablespoon of milk. Brush this over the rolls and bake in a preheated oven for about 20-25 minutes, until lightly golden.

You can glaze cinnamon rolls with all sorts! One of my favourites is a quick cream cheese glaze.

Simply mix together the powdered sugar, vanilla, cream cheese and half of the milk. Add the remaining milk slowly - you may find that you need less or more depending on your desired consistency.

The glaze should be more runny than a buttercream, but you do want it to stick to the tops of the buns and don't want it to run off completely!

Can you use brioche dough for cinnamon rolls?

Brioche is a buttery enriched dough, perfect for these buns. Follow my recipe for an easy brioche cinnamon roll with added pecans and topped with cream cheese glaze.

How long do these cinnamon rolls keep?

These buttery brioche cinnamon rolls are best served fresh. Leftovers can be kept for a day or two in an airtight container, but as with any cinnamon roll, they're meant to be enjoyed fresh from the oven.

Can I make brioche cinnamon buns without a stand mixer?

Yes, these buns can be made without a stand mixer. In general, the kneading process will take longer and may be more messy without the stand mixer.

Looking for more cinnamon rolls? Try one of these: 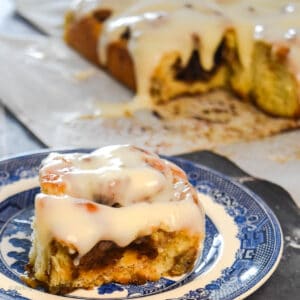 Heating the milk can be done in the microwave or in a small saucepan. I heat mine until simmering and then allow to cool until near the desired temperature. Your goal is warm milk, but not too hot to touch - around 104°F/40C is the best temperature for the yeast to be most active. If your yeast does not become foamy, this means that the yeast hasn't activated. This may be due to the milk being too cold or too hot when you add the yeast. You'll want to reserve your egg yolk for an egg wash at the time of baking. As this recipe does take several hours to proof, it is best to keep the egg yolk in a small bowl, covered with plastic wrap, in the refrigerator until ready for use.