Looking to spice up your cake with a quick cinnamon twist? My cinnamon buttercream is incredibly simple and sure to become a staple of your repertoire!

Adding flavours to American buttercream frosting is usually very easy. Most conventional buttercreams will include extracts such as vanilla or almond to give a base flavour and to tone down the sweetness of the powdered sugar. You don't have to be restricted by extracts though! It is also super simple to add some spice.

By adding a teaspoon or two of a ground spices, such as cinnamon, you can quickly accomplish a flavoured buttercream. This won't have any unwanted effect on the smoothness of the frosting and offers a nice extra dimension to your bake.

My recipe is essentially a flavouring adaptation of my classic vanilla American Buttercream.

This buttercream is most easily made in the bowl of an electric stand mixer fitted with a paddle attachment. You want to use the paddle because your goal is not to add lots of air to the frosting. Whipping or using a whisk attachment will aerate the frosting, giving it air bubbles and making it difficult to smooth.

First, add your softened butter to the mixing bowl and beat this lightly until it is smooth (about 30 seconds or 1 minute).

Next sift about half of your powdered sugar and the cinnamon into the bowl. Beat this on a low setting until incorporated. Adding half at a time helps to avoid an explosion of powdered sugar all over your kitchen!

Sift in the remaining powdered sugar, beat on low to combine and add the vanilla extract. Continue to beat on low for another minute until light, creamy and smooth.

If you feel that your frosting is too thin or runny, you can add a bit more powdered sugar. Simply sift a few tablespoons into the mix and beat to combine. Similarly if you want your frosting to be a bit thinner, which is sometimes necessary for piping, use a couple teaspoons of milk.

You can use this frosting to add a touch of cinnamon to your bake or accentuate flavours in your cake!

Try it with my thrifty poundcake or on a devil's food cake to make a chocolate cinnamon bake. This will also work well as a frosting on a my chocolate sheet cake recipe, replacing the classic fudge frosting of a Texas sheet cake.

Can I colour cinnamon buttercream?

Yes, you can tint cinnamon buttercream with food colouring in the same manner as any other buttercream frosting.

Due to the shade of the base buttercream, which will be light brown from the ground cinnamon, there will be some impact on the types of shades you can achieve. If you are wanting to make a deep colour, such as a burgundy, purple, blue or brown you may find these easier to achieve since the cinnamon will help to deepen the colours. Lighter shades or pastels may not turn out as well. You will not be able to make this frosting white.

Can I freeze spiced buttercream?

Yes, absolutely! You can freeze this buttercream in the same way as other conventional buttercreams in a freezer safe container or ziploc bag.

How long does cinnamon buttercream keep?

You can keep cinnamon buttercream for a few days in the refrigerator before use. Allow to sit at room temperature for a couple of hours and stir to ensure it is smooth, prior to piping.

If you are making the buttercream several days in advance, it is best to freeze this and defrost for use. 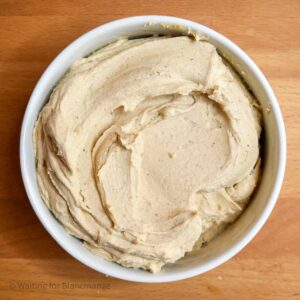