Incredibly easy two ingredient golden Oreo crust! This is the perfect recipe for making a vanilla cookie base for cheesecakes or pies and can be used with baked or no bake desserts.

This quick base is essentially a light golden vanilla version of my basic two ingredient Oreo Crust.

First you need to crush the Oreos into a fine crumb. You do not need to remove the filling. Simply add the golden Oreos to a food processor and pulse until the cookies are well ground.

Pour these crumbs into a bowl and then add the melted butter. Stir this together into a moist crumbly mixture.

If you do not have a food processor (which I don't at the moment!), you can also do this by hand, by putting the Oreos in a sealed plastic bag and smashing with a rolling pin. This will take more time and effort than the food processor, but will produce crumbs that are fine enough for the golden Oreo cookie crust.

First break whack the bag repeatedly to break the Oreos into smaller pieces. Once you have a rough crumb, you can press and roll the rolling pin over the bag. The pressure will grind the remaining bits into a finer crumb.

Much like any cookie crumb crust, you will need to press this crumbly mixture firmly into the base of your pie, tart or springform cake pan.

If you're using a pie or tart shell, you do not need to grease this or line it in any way. The golden Oreo crust has enough butter in it that it should not stick to your plate when removing slices.

If you are using a springform cake tin for a cheesecake (in particular no bake cheesecakes), this should be lined with parchment paper before adding your crust. This will make it a lot easier to handle and remove when ready to serve.

For pressing, I recommend using a measuring cup or other kitchen utensil with a flat bottom. This will make it easier to press a more even base layer than just using your fingers. You can then use the utensil or your hands to press the edges and sides.

Once your vanilla Oreo cookie crust is formed, I suggest chilling this until ready for use. Whether you are making a baked or no bake filling, it is useful to chill the crust while the filling is being prepared as this will allow it to settle and will reduce any crumbs coming loose as you add your filling.

Can I make cheesecake crust with golden Oreos?

Yes! Golden Oreos make for a great cheesecake (or pie) crust. Golden Oreos are essentially a vanilla cookie biscuit with vanilla cream. This means that a crust made with Golden Oreos will be a vanilla version of the classic chocolate Oreo crust.

This recipe for golden Oreo cheesecake crust can be used for either baked or no bake cheesecake recipes (follow the your cheesecake filling recipe for any baking or chilling instructions).

How long does a vanilla Oreo crust keep?

This vanilla cookie crumb crust will last for a couple of days in the refrigerator prior to use or you could freeze it for up to 3 months.

Once filled, times will vary - some fillings may leave the crust soggy after a couple of days (especially once the dessert is cut). If the dessert filling can be frozen, I would recommend freezing leftover slices to extend shelf life in these instances.

Do I need to take the filling out of golden Oreos for crust?

No! Just like my standard two-ingredient Oreo crust recipe, this golden Oreo version does not need to have the sandwich cookie filling removed before blitzing the Oreos into a crumb. In fact the vanilla cream filling is integral to the recipe, providing sweetness without needing to add sugar and helping to bind the crust together.

Need some more crust ideas? Try one of these recipes with your next pie or cheesecake:

Or maybe some ideas for fillings? You can use Golden Oreo crust in these recipes: 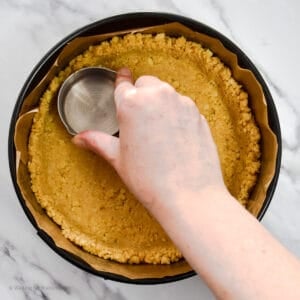 The thickness of the base and sides will be dependent on your preferences and the size of pan being used. For a 9" springform pan, this recipe should provide enough for to create a base and to press the crumb about 1" up the sides.