My super simple all butter pie crust is guaranteed to give your pie a sturdy base. Perfect for accompany all manner of tart, pie and pastry recipes - this needs to be a staple of your baking repertoire.

You might wonder, why do recipes call for shortening? Many crust recipes specify a mix of butter and shortening. This is because shortening has a higher melting point than butter so it will be more stable and there may be less spreading when baking. While this can be a benefit, the drawbacks of shortening are usually in the flavour and the controversial health implications of trans fats.

How to make the perfect pie crust

1. Use chilled butter, cubed and rub together with your hands

You can use a food processor to make pie crusts, but nothing beats rubbing the butter into the flour mixture with your hands. This helps you to have more control. You want the butter to be rubbed in so that the mixture becomes coarse, but still has some flakes of butter.

2. Add cold water carefully, and only use enough to bring the crust together

The water for pastry should be cold. I like to add an ice cube to mine to ensure it is well chilled while I'm mixing the rest of the dough.

When adding to the butter and flour mixture, it is important not to overadd water. If you add too much, the pastry will become saturated and soggy. This will make it difficult to handle later.

3. Form dough into rounds to chill for an hour

Once the dough comes together, divide this into two balls and wrap lightly in cling film. Press these into rounds to make rolling out easier. Refrigerate for an hour before rolling out.

4. Roll out one round at a time and fold in half to place in pie tin

When rolling out, do one round at a time, leaving the other in the fridge until needed. If you only need one crust for your pie, you can save the second for several days in the fridge or freeze for months.

To make the dough easier to transfer into your pie plate, fold gently in half and lift carefully. Place in the pie plate covering half of the dish and gently unfold. Press into the edges of the pie plate carefully with your knuckle or a bit of spare dough. Trim the edges and crimp.

5. Refrigerate the dough before baking

Once prepared in the pie plate, refrigerate the pastry shell until ready to bake. By chilling it down, this will help solidify the butter and limit the spread of the crust in the oven. This helps to preserve any intricate crimping you may have around the edges.

Tips on US versus UK pie crust baking

As an American in Britain, you quickly discover that there are some key differences between the two countries that can leave many recipes lost in translation. Most of these differences can be met with a suitable substitution or compromise. The problem is knowing where these differences are, so that you can better prepare.

Now, in most recipes, I find substituting plain flour for all-purpose (or vice versa) is completely fine. For making American recipes in Britain, using the same amount of plain flour as is called for in all-purpose usually works without issue. Breads, pastry and pie crust, however, can be a little bit more problematic.

Pie crust is a dough that needs to be strong enough to sustain a filling, without falling victim to a soggy bottom. This means that you need strength in the base and a certain degree of durability. American all-purpose flour is stronger and is slightly higher in gluten than British plain flour. This means that for my pie crust I call for a mix of plain and strong bread flour to compensate for this. This helps to offset any gluten deficiencies in the plain flour.

You can make this recipe in the US with only all-purpose flour or you can also make it in Britain with only plain flour and it will still work. The inclusion of strong bread flour aids the crust's durability and structure but is not strictly necessary to success!

Another major difference that impacts baking involves the nature of kitchen appliances. In the US, the heating element for most ovens is directed from the bottom of the oven. In Britain the heating usually comes from the top (and often fan assisted). This isn't usually a major problem, but the subtle difference can impact on the crimped edges of your pie.

If you are in the UK and have made a delicately crimped edge to your all-butter pastry, you may find that the heat in the oven coming from the top will cause this to melt down and spread more. I find that this can be aided by chilling the pie before cooking and also placing the pie further down in the oven. My own oven has a setting that allows me to change the direction of the heating so that this comes from the bottom rather than the top. This function requires a significantly longer pre-heating time, is non-fan-assisted and takes a fair bit longer for the pie to cook. It does, however, help to preserve the patterns in pie crust and bakes the base of the pie well.

FAQs for All Butter Crust

I only need one crust, can I halve this recipe?

Yes, this recipe is easily halved if necessary. Many pies call for a crust and a lid - in which case you will want two crusts to form these. If you are making a pie that only requires one and have no plans for additional pies in the near future, halve the ingredients and male only one.

My dough is really sticky, what did I do? Can I fix this?

If your dough is very sticky during the mixing, you have probably added too much water. You can try to add some more flour, to help even this out before chilling.

Can I add flavouring to this crust?

Yes, this crust is super versatile and easy to flavour. If you want to add spices, add these to the flour mixture before adding the butter and carry on with the recipe. Avoid adding more than a teaspoon or two of spices as it will lead to a drier dough. I regularly add a teaspoon of cinnamon or praline paste to the dough with success. 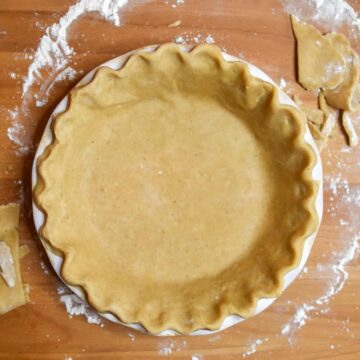