Do you love salty sweet? If the answer is yes, these maple bacon banana baked donuts may be for you!

The name is a bit of a mouth-full!

These baked donuts are inspired by my favourite Five Guys milkshake combination - banana and bacon. They combine a super easy one bowl banana donut recipe, which is loaded with bacon before being topped off with maple cream cheese glaze and a mix of crushed banana chips and maple bacon.

Maple bacon is a quick method of adding a bit of sticky sweet maple to grilled bacon. It is a quicker and simpler process than candying bacon, but produces a similar effect.

Quick Note on Bacon in Britain:

In the UK, bacon is usually sold in thicker rashers than in the USA - more like Canadian bacon. For this recipe, I'd recommend using streaky bacon, which is a thinner strip, more similar to traditional American bacon.

You can make maple bacon in all manner of ways, but the easiest is to cook the bacon under the broiler (grill) in your oven.

The timings noted above were for cooking my bacon, which was a bit on the thicker side of streaky bacon. I would recommend watching yours to ensure it does not burn, especially if your strips are particularly thin!

You are looking to produce nice crispy strips of bacon that you will be able to break up into smaller bits.

Once grilled to your desired level of doneness, remove from the rack and place on paper towels to cool. The paper towels will help soak up any excess fat and liquid, leaving more crisp bacon.

For these baked donuts, you will need:

The process for these baked donuts is very straightforward and easily accomplished in one bowl:

Once the banana baked donut batter is made, fold in the bacon bits and fill your baked donut moulds.

The quickest and cleanest way for filling your mould will be to pipe the mixture around, either with a dedicated piping bag or a ziploc bag. Simply cut the tip off for about a 2cm opening (large enough for the bacon bits to pipe through).

When ready, bake the donuts in a preheated oven for about 20 minutes.

I've suggested some tips for baking donuts in silicone pans with my Lemon Raspberry Baked Donuts. The key thing to remember is to allow the donuts to cool in the pan for at least 5 minutes before unmoulding. This helps prevent sticking.

The ratios of the mixture can depend on how you are using the glaze. In this recipe, I use two parts cream cheese to one part maple syrup for a thick and dip-able donut frosting.

Along with the glaze, these donuts have a bacon and banana topping, easily made by pulsing banana chips and a couple slices of maple bacon in a food processor.

If you don't have a food processor, simply break up the bacon into bits as you did for the donut batter. You can then chop the banana chips or use these whole as decoration on top.

Its best to set up a bit of a donut coating station. You will want one bowl for the maple cream cheese glaze and a second small bowl (or plate) for the crushed bacon and banana chips.

How long do these donuts keep?

These donuts are best eaten fresh on the day. The banana in the donut as well as the glaze make these quite moist and leftovers may become a bit sticky on the second or third day.

Do you use smoked or unsmoked bacon? Does it matter?

I tend to find smoked or unsmoked bacon to be entirely personal preference. I always opt for smoked bacon and made my maple bacon with it in this recipe. 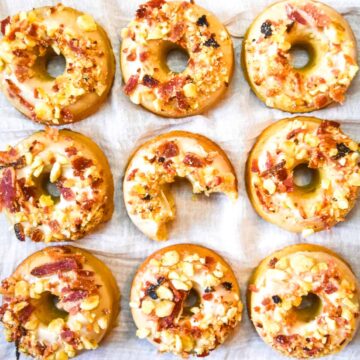