Nothing says fall flavours like an apple crisp. This easy apple crisp cheesecake takes all the warmth of spiced baked apples and crisp oaty topping and transforms it into a cheesecake. As an optional extra, top with some caramel sauce - this dessert is sure to be a staple for fall baking!

This recipe can essentially be broken down into three parts - the oat crisp base, a buttermilk cheesecake filling and the cinnamon spiced apple crisp topping.

For the oat base, you'll need:

To make the cheesecake, you'll need:

And finally, for the oat and apple topping, you'll need:

The process for this oat cheesecake base is very similar to other crushed cookie crumb crusts. Begin by crushing your rolled oats into a finer crumb. For this, you'll need a food processor.

To make things easier, I opt to put the sugar in with the oats and pulse the mixture a couple of times. This will break the oats down and mix the sugar thoroughly throughout.

Place the mixture into a bowl and pour over the melted butter. Stir this together until it is well incorporated and you have a lightly moistened crumb mixture. This can then be pressed into your springform pan to act as your cheesecake base.

If using a 9" springform pan, this should be enough to press into the base and about .5" up the sides of the pan. You can use a smaller pan (such as a 8" round) and the crust can be pressed a little further up the sides.

Place in the refrigerator to chill while preparing the filling. Meanwhile also preheat your oven to 325°F.

To make this buttermilk cheesecake filling, I make my own buttermilk substitute by adding the vinegar to the heavy cream, stirring lightly and setting aside for about 10 minutes. This sours the cream and will give your cheesecake a bit of a bite.

You can use store-bought buttermilk or substitute with soured cream for a similar effect.

Begin by beating the cream cheese and sugar together until smooth. Then add the eggs one at a time and the vanilla, beating to incorporate. Finally add in the soured cream mixture and beat lightly until smooth.

Pour this mixture on top of your prepared base and smooth into an even layer.

And to top off your cheesecake, peel and core a large apple (or two medium ones). Chop this into half inch chunks and mix with a bit of cinnamon to coat. Sprinkle the apples over the top of your cheesecake.

In a small mixing bowl, place oats, brown sugar, cinnamon, flour and melted butter. Rub together with your fingers until you have a crumbly oat mixture and then sprinkle over top the apples on your cheesecake. This should be enough crisp topping to cover the entire surface of the cheesecake.

Place the cheesecake in the preheated oven and bake for about 1 hour. When baked, remove and allow to cool on the counter before transferring to the refrigerator to chill for at least 4 hours (better overnight).

If you want to take this recipe up a level - nothing pairs better with apple than a bit of caramel! My husband is a huge fan of a quick caramel sauce, and welcomed its addition to this cheesecake.

You can either add a store bought caramel sauce here - drizzled over the whole cheesecake or per slice, to your heart's content. Or, you can make your own.

My quick caramel takes only about 10 minutes. Begin by cooking the butter and sugar in a saucepan, stirring occasionally until the sugar dissolves. Then add the cream, stirring constantly. The mixture will bubble, but allow it to settle into a boil for about 1 minutes before removing from the heat.

Let the homemade caramel cool to room temperature and then pour over your cheesecake as desired.

If the caramel thickens too much, simply reheat to loosen.

This easy apple crumble cheesecake can keep in the refrigerator for about 3 days. Alternatively, you can freeze it!

If freezing this cheesecake, follow the instructions and chill as directed. Once ready to unmould from the springform pan, place on a lined freezer safe tray and gently wrap with plastic wrap. Place in the freezer and allow to freeze for a few hours until more solid. You can now transfer the cheesecake to a freezer safe bag for easier storage and space saving. Freezing for up to 3 months. Defrost in the refrigerator before serving.

Can I make cheesecake with apple crumble topping?

Yes! This is an easy recipe for the best baked apple crumble cheesecake with a homemade caramel sauce.

My cheesecake is made with a brown sugar and oat base to compliment the crisp oat topping. Then the tangy buttermilk cheesecake filling is topped with fresh apples and the perfect cinnamon spiced oat crumble. 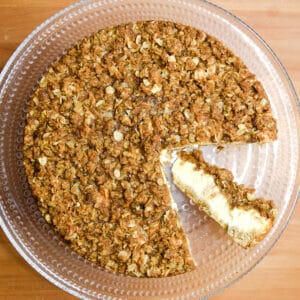 Ingredients for Oat Base

Instructions for Oat Base

This recipe calls for spreadable cream cheese, but you can substitute with block cream cheese. If substituting, you'll need to allow the block cream cheese to soften at room temperature first and it will take longer for it to beat smooth. The cream and vinegar in this recipe are combined to make a DIY Buttermilk substitute. See my dedicated post for more information on making homemade buttermilk substitutes. The half cup of heavy cream and vinegar here can be substituted for store bought buttermilk or sour cream. If using a smaller springform pan (such as an 8" round), your oat base mixture will go a bit higher up the sides of the baking tin.  The jiggle test for a baked cheesecake is when you nudge the pan lightly to check the wobble of the cheesecake centre. This shouldn't move too much (it shouldn't seem liquidy or completely loose), but it should have a light jiggle, usually described like jello. When the cheesecake has a light jiggle, it is baked through - it will be set and creamy when chilled and cut. If the sauce cools too thick to pour, you can reheat this to melt.