One of my favourite summertime desserts is a fresh peach crisp. I'll always consider the sugar and oat topping superior to a classic cobbler. With my baked peach crisp pie, you get the best of both worlds - a fabulous flakey crust and a crispy oat top!

What is a Crisp?

There are so many different types of baked fruit desserts. You can find cobblers, buckles, betties, crisps - the list is endless. The difference between these is often regional or even family-specific. For me, one of the key features of a crisp is the oat and sugar topping, usually spiced with cinnamon.

Crisps are most similar to crumbles in the UK, but crumbles don't always have oats.

Another feature of a crisp, similar to cobblers and crumbles, is the lack of a base. These desserts usually involve the fruit in a baking dish with a dough or oat covering on top only. This makes them arguably quicker and easier to throw together than a pie. There's no need to deal with pastry or lining the baking tin.

A drawback of the lack of pastry base is that these desserts tend to have less structure than a pie. They are served in bowls and depending on the ratio of filling to top, they sometimes leave you wanting a bit more crust to go along with the fruit.

If you can't quite decide between a crisp and a pie, why make a choice? The opportunity to make a mash up of the two is the perfect solution. All the fabulous filling, with a flakey pastry base and a crispy oat top!

A pie shell requires a little extra work than making just a crisp, but it is worth it.

You can use one round of my all butter pie crust for this recipe. My recipe makes two crusts. Either make this as instructed and freeze the second round for later, or make a half batch by dividing all ingredients in half. This will give you just one dough round - perfect for this fresh peach crisp pie.

To make my all butter crust lightly spiced, to accompany the peach crisp, I'd recommend adding some cinnamon and nutmeg. This can be easily done by add up to a teaspoon of cinnamon and a quarter teaspoon of nutmeg to the flour mixture before adding the butter and then carry on making the pie crust as normal. If you are making only half a batch, reduce the amount of spicing as well.

If you don't have time (or pastry inclination), you can also simply use a shop bought pie shell or ready roll shortcrust for this recipe.

Cinnamon oat crisp is incredibly easy to whip up. It requires just one bowl and five simple cupboard staples: oats, brown sugar, flour, butter and cinnamon. Blended together with your fingers or a spoon, this becomes a crumbly topping that can be sprinkled over the fruit filling. The liquid from the fruit will bubble up during backing, accentuating the crispy oat top.

Peaches have a very short season, particularly in Britain. We never get large fresh peaches, but for a brief time in the summer, it is possible to find a good crop of small to medium peaches in the supermarket.

To prepare the filling for the pie, you should first macerate the peaches, to pull out some of the delicious juices. This will also help to make a flavourful syrup for your pie and thicken some of the juices so that the slices hold together a bit better than baking the peaches plain. I took inspiration for this syrup from Taste of Home's classic Peach Pie.

Macerating is the process of helping fruits release their juices. For this pie, place the sliced peaches in a bowl with the sugars, cover and set aside for an hour. This will be long enough to produce about 100ml or so of liquid.

Once macerated, strain the peach slices with a sieve, reserving the juices in a small saucepan. Add cornflour (also known as cornstarch), spices, salt and lemon juice. Whisk together, while cooking over a medium heat, until thickened.

When ready to assemble the pie, place the peach slices in the unbaked pie shell and pour the thickened syrup over these. Top with crisp mixture and bake for 40 minutes.

How long does the peach crisp pie keep?

Peach crisp pie can last for a couple of days, but the bottom of the crust will start to get a bit soggy as it is a very moist bake. It is best eaten on the day, but leftovers can be covered with plastic wrap and stored in a cool place or the refrigerator.

Can I make this recipe with canned or frozen peaches?

Yes, absolutely! If using canned peaches, drain these, reserving a bit of liquid for the syrup. If using frozen, allow these to defrost to release juices.

My crust is burning, what can I do?

If the edges of your crust start to catch and burn (or if you know that your oven runs hot), move the pie lower in the oven and cover the edges with a tent of aluminium foil. 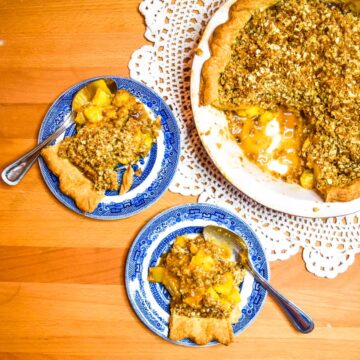 Ingredients for the Peach Filling

Ingredients for the Crisp Topping