Introducing to the world my pumpkin cheesecake with a candied pecan trim! I made this as an experiment and I'm completely in love with it. It is basically a reconstructed pumpkin pie, with the added benefit of crossing into pecan pie territory, and also being a cheesecake.

I'm becoming completely obsessed with autumn-themed baking! Autumn and winter are probably my favourite seasons for being in the kitchen (not least since the oven helps warm everything up!). The focus on summer salads gives way to hearty meals and all of the best flavours start to come out. After all, who doesn't love cinnamon? It takes a back seat to no spice.

My pumpkin cheesecake with a candied pecan trim is perfect for an autumn dessert. It can be dressed up or down and is a super easy showstopper for any occasion.

For this pumpkin cheesecake, you'll need:

I know that some people are put off by making a baked cheesecake and think that they are more difficult than their gelatine-set cousin. Honestly, they are super easy and worth a try!

For the crust, whatever biscuit base you are choosing to use, the biscuits will need to be crushed. You can put these in a plastic bag and beat them with a rolling pin. This is a tried and tested method, that certainly works in a pinch! Or you can use a food processor to achieve the same end. A few years ago, I upgraded from a rolling pin to a food processor and haven't looked back! A few pulses and your biscuits are blitzed to oblivion and ready for making cheesecake bases.

In a bowl, measure out the crushed biscuits, sugar and add your spices. In a small saucepan, melt the butter over a medium heat. I opted to bring this to a boil and simmered it into a browned butter for this cheesecake. As long as the butter is melted, it will do the job of binding the crust crumbs together to form the base. Pour the butter into the crushed biscuits and spices and mix until well combined. Tip this into a springform pan (I used a 10" or 24cm tin). Press into the base and about one inch up the sides.

Once you have prepped your base, move on to the filling - which is handily a one bowl wonder!

I opted to use an electric mixer, but you can certainly just whisk this together by hand. Add your cream cheese, beat to loosen this until smooth. Add sugar and beat to combine. Incorporate your eggs, one at a time and then add the pumpkin puree and spices. Pour the prepared filling into the base, spread evenly and bake for about one hour.

The main test for a baked cheesecake is the wobble test. Essentially, you're looking for the centre to be set and not too liquidy. If you open the oven and lightly wobble the pan, you'll be able to see how much the middle jiggles. If this is the first time you're baking a cheesecake, check at about half an hour. You will see what I mean about the wobbliness - it will be very obviously still liquid right underneath the surface. At about 55 minutes, check again and keep an eye on the cheesecake. The cheesecake will also be slightly risen. If the cheesecake starts to split, this is a good sign that it is probably done, but we try to avoid too many cracks!

Once done, remove the cheesecake from the oven and allow to cool in the tin. When it is room temperature, transfer to the fridge and continue to chill in the tin for a few hours (or overnight). After the cheesecake is well chilled, you can remove from the tin and transfer to a cake plate. I usually run a thin spatula or butter knife around the edge, to ensure this isn't clinging to the sides of the springform pan. Release the sides of the pan carefully and take this off. I generally leave the cheesecake on the base for the sake of ease, but you can carefully remove this as well (very very carefully!). The pumpkin cheesecake is now ready to eat as is, or you can add the trim!

When my cheesecake came out of the oven, I felt it needed something on top to add a bit of pizzazz. I have been stocking up on pecans in anticipation for autumn baking and pecan pies, so these seemed the perfect accompaniment.

First I roughly chopped about ¾ of the pecans. I left the last ¼ as whole pecan halves to help diversify the textures.

In a saucepan over a medium heat, mix pecans, spices and maple syrup. Once the maple syrup starts to simmer and the spices have dissolved into the liquid, lower the heat and continue cooking for about 15 minutes. Unlike my candied maple pecan eclairs, the goal here was not to create a crystalised crust on the pecans. Instead, I wanted them to have a glossier coating. So, once the syrup reached a nice thickness, coating the pecans, I took these off the heat and spooned these around the edge of the cheesecake, forming the trim.

The cheesecake can then be put back into the fridge until ready to serve. It lasts in pretty good condition for a couple of days of leftovers - I can't vouch for any longer as ours has long since disappeared... I wouldn't recommend making this more than a day in advance of serving as the top will sweat a bit after too long in the refrigerator. 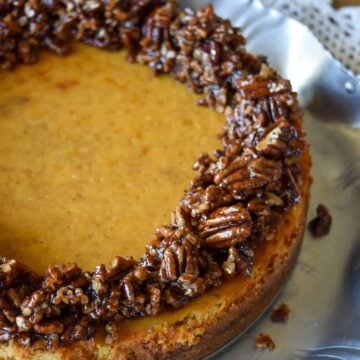 Ingredients for Biscuit Base

Instructions for Biscuit Base

Checking your cheesecake for doneness might seem daunting, but you'll get the hang of it. You are looking for the cheesecake to still have a slight wobble in the centre, but not seem liquidy and too jiggly. It is best to check occasionally throughout the baking by lightly wobbling the side of the tin and you will quickly notice the changes.
Tried this recipe?Mention @waitingforblancmange or tag #waitingforblancmange!
« Fresh Coconut Cake - Southern Family Classic
Super Easy Baked Eggnog Donuts with Eggnog Glaze »