I love cinnamon! These easy cinnamon cupcakes are the perfect ode to my favorite spice. A soft vanilla cupcake swirled with cinnamon sugar and topped with cream cheese frosting. Basically the simplest ever cinnamon roll in cupcake form!

The recipe for these cinnamon cupcakes is split into two parts: the vanilla cupcake base and the cinnamon swirl layered throughout.

For the Vanilla Cupcake Base

To make the soft vanilla cupcake batter used as the base for this recipe, you'll need:

For the Cinnamon Swirl

You only need two ingredients:

How to Make Cinnamon Cupcakes

To make these cupcakes with a cinnamon swirl, begin by preheating your oven and lining a cupcake pan with cases.

In a large mixing bowl, you'll whip up your easy vanilla cake base. Start by beating together the butter and sugar until light and fluffy (about 2 minutes). Then add the eggs one at a time, beating after each addition, and the vanilla.

Next add the baking powder, baking soda and salt to your flour. Give this a quick stir and add half of these dry ingredients to your batter. Beat to incorporate.

Add the sour cream and beat to combine. Finally add the remaining flour and beat until just mixed.

Top tip: when your batter is nearly incorporated, swap your beaters for a spatula and stir. This helps you avoid overbeating.

The key to this recipe is that it is a brown sugar cinnamon cupcake - the brown sugar adding flavour and texture to the bake.

In a small mixing bowl, stir together your cinnamon and brown sugar.

Since brown sugar is so dense and tends to clump, this is best done with your hands, rubbing the sugar cinnamon mixture together.

To fill your cupcake cases, begin by dolloping out about half of the vanilla cupcake mixture, dividing as evenly as possible amongst your 12 cupcake cases. I do this using a 1.5 tablespoon OXO Good Grips scoop.

Then top each batter with your cinnamon sugar mixture (about a teaspoon) using about half of the mix.

Using a toothpick or skewer, swirl the batter and sugar mixture together lightly.

Then repeat, dividing the remaining batter out amongst the 12 cupcake cases, topped with the remaining cinnamon sugar. Give each a quick swirl with the toothpick.

Bake in your preheated oven until a toothpick inserted in the centre comes out clean. Then remove from the oven and cool for a few minutes in the tray before carefully removing to a wire rack to cool completely.

Once your cupcakes have cooled, frost with a quick cream cheese frosting and a dusting of ground cinnamon. I have a full guide to making an Easy Cream Cheese Frosting with Spreadable Cream Cheese.

Alternatively, you can also use a standard vanilla buttercream or cinnamon buttercream.

What frosting goes with cinnamon cupcakes?

There is no single answer here! You can pair your cinnamon cupcakes with many different frostings. My favourite for these vanilla cinnamon swirl cupcakes is a quick cream cheese frosting.

Other options that would work as frosting for cinnamon cupcakes include vanilla buttercream, cinnamon buttercream or even dulce de leche buttercream.

These light and fluffy vanilla cupcakes with brown sugar cinnamon swirl will keep well for about 4 days at room temperature if stored in an airtight container.

If frosted with cream cheese buttercream, they should be stored in the refrigerator to preserve the frosting. This will make them go stale more quickly. Therefore, if planning to make in advance, I would recommend waiting to frost until nearer the time of serving.

Can I freeze cinnamon cupcakes?

Yes! These cinnamon cupcakes with cream cheese frosting can be frozen easily. Once cooled and frosted, place on a lined freezer safe tray and freeze for a couple of hours until solid. Then transfer to a freezer safe bag or other container for more efficient freezer storage.

These can be kept in the freezer for about 3 months. Allow to defrost in the refrigerator overnight before serving.

If freezing, dust with any additional ground cinnamon after defrosting. 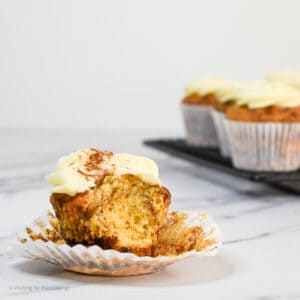 Ingredients for Frosting and Decoration

Instructions for Frosting and Decoration