What is Bread Pudding

Bread pudding is a traditional British dessert. Made with stale bread soaked in milk and egg, it is a bit like a large baked French toast.

It often includes dried fruit, such as raisins or currants and is usually served warm with custard, cream or ice cream.

My eggnog bread pudding is a twist on the classic, made with eggnog in place of milk and using whisky soaked currants to bring out the festive flavours in the classic eggnog cocktail.

All you'll need is:

My easy eggnog bread pudding is really quite a simple recipe, in three parts.

The first step in this recipe (aside from preheating the oven and preparing the baking dish) is to infuse the currants with the liquor and vanilla.

Mix these together and place in a small saucepan. Heat until simmering and allow to boil for about 3 minutes - to help the currants soak in the liquid.

Once done, set aside off the heat to cool.

Place your cubed bread into a large mixing bowl. In a jug, whisk together the eggnog, eggs, sugar and ground nutmeg. Add this to the bread and toss through to soak for about five minutes.

Then, add in the currants (along with liquid) and the melted butter.

Pour the bread pudding mixture into the prepared baking dish and cover with aluminium foil. Bake in the centre of the oven for about 1 hour.

Towards the end, remove the foil and check for doneness with a table knife inserted into the centre of the pudding. Once this comes out clean, the bread pudding is ready to be removed.

My eggnog bread pudding is best served warm with vanilla whipped cream and fresh grated nutmeg. You can use my easy stabilised whipped cream recipe for this, or store bought alternatives.

This bread pudding will keep for a few days in the refrigerator. Bread pudding is best served warm, so it is best eaten the day it is baked or reheated either in the microwave or oven. Bread pudding can be eaten chilled or room temperature as well.

Can I freeze this bread pudding?

Yes, you can freeze bread pudding either baked or unbaked.

If freezing unbaked, be sure you have made your bread pudding in a freezer safe container. Wrap the bread pudding well and place in the freezer. You can cook directly from frozen (as long as the container is also oven safe). Allow extra time as it will take a bit longer than cooking fresh from room temperature.

If freezing after baking, allow to cool first before wrapping thoroughly and freezing. When ready to defrost, allow to come to room temperature before consuming. For warm bread pudding reheat before serving. 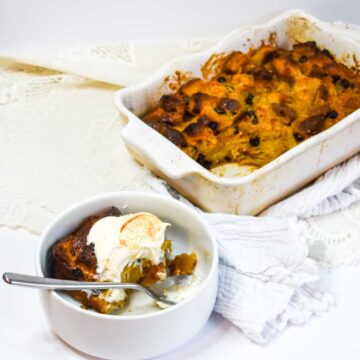