This easy glazed cinnamon roll donut recipe is the ultimate brunch time sweet treat! These cinnamon roll donuts are donuts made with cinnamon roll dough, twisted and baked in donut trays for the perfect soft cinnamon bun bake in the shape of a donut! Glazed with a quick no fuss vanilla icing for the classic glazed donut flavour.

And for the filling:

How to Make Donuts with Cinnamon Roll Dough

These baked cinnamon roll donuts are actually just classic cinnamon rolls, in the shape of donuts. As such, you'll need to make a dough in the same manner as you would other cinnamon rolls.

Don't let the idea of of a bread dough put you off! Cinnamon roll dough is incredibly easy to throw together. The key is to ensure your milk is at a good temperature for the yeast and then to let it knead long enough to produce a soft dough that pulls away from the bowl.

Begin by sprinkling yeast over the warmed milk and adding a teaspoon of your brown sugar. Adding the sugar is important because the yeast likes the sugar and this will help ensure it is at its most active. Give this a stir and set aside until active (and very foamy!) - about 8-10 minutes.

Meanwhile, stir together your flour, remaining sugar, cinnamon and salt. When the yeast is ready, add this to the bowl immediately followed by the eggs and butter. Knead with a dough hook on a low-medium setting until this comes together and then continue until the dough pulls itself away from the bowl (overall about 15 minutes of kneading).

Once kneaded, place in a greased bowl and cover with plastic wrap. Allow this to proof for about 90 minutes (until doubled in size) on the counter, in a warm place.

So, I highly recommend using a stand mixer fitted with a dough hook for this (and all of my bread recipes). This is because I personally struggle to knead by hand. That said, you can absolutely make this (and other bread doughs) without a stand mixer.

These can be kneaded by hand, usually on a clean countertop, but the timings will be longer and will vary based on the force of your personal kneading technique.

Filling and Cutting the Dough

Once your dough has doubled in size, you want to knock this back. This means essentially poking it to deflate the risen dough. Scrape this out of the bowl and place on a floured work surface.

Stretch the dough lightly and roll this out into a rectangle, roughly 18" long by 12" wide.

Dot the dough with softened butter and spread this out over the surface. Then mix together the sugar and cinnamon and sprinkle over the butter.

Lightly pat the sugar cinnamon into the butter with your hand to help this adhere and then fold the dough in half, making a long rectangle roughly 18" long by 6" wide.

Use a sharp knife or dough cutter to trim the ends of the dough (which you can discard) and divide this into 12 strips, similar to the three shown at the bottom in the image below.

Next you will want to take each strip and twist these individually. This means that the cinnamon sugar donut filling is spun around and better distributed through the dough (mimicking the process of rolling traditional cinnamon rolls).

Once twisted, bring the ends together and pinch, forming a ring. These can then be placed into your prepared donut tray. Repeat until you have formed all twelve of the donut rings.

You will want to leave these on the counter for a short second proof, while preheating the oven.

Bake until only just beginning to brown on the top to ensure a soft cinnamon bun donut.

Demonstration of This Dough

For these donuts, my personal favourite topping is a classic quick vanilla sugar glaze. This is super simple to achieve with just three ingredients:

Simply stir the ingredients together in a small bowl, until you have a thin frosting (image below). After allowing your donuts to cool for about 10-15 minutes, dunk these top first into the glaze for a nice coating. Alternatively, drizzle over top.

These donuts are best served fresh and still slightly warm, but they're also delicious at room temperature and can keep overnight.

The top of these baked cinnamon roll donuts will be the part that was moulded by the donut tray, so technically the bottom in terms of the way they were baked.

The donuts will raise while baking, expanding up from the tray. This will tend to mean that the dough at the base, moulded by the pan is more precisely shaped than the side expanding above.

You can, of course, opt to consider either side the top and it will have no impact on flavour or texture.

At heart, these are cinnamon buns, and therefore they are best eaten fresh. But, they're also great for breakfast or brunch. This might leave you wondering if you can make cinnamon dough ahead of baking - so you can prep ahead of brunch without waking up at 5am. Thankfully, the answer here is yes!

I have not thoroughly tested the overnight proof for these donuts, however, the dough is essentially the same as my apple pie filled cinnamon rolls. This means that you can expect to be able to make the dough for these the evening before serving, fill and shape this in the donut moulds. Place this in the refrigerator overnight to slow the process of the second proof. These can then be baked the next morning for fresh cinnamon roll donuts at brunch!

Can I use cinnamon roll dough for donuts?

Yes! This recipe is for donuts made using a homemade cinnamon roll dough.

In practice, you could also use store bought cinnamon roll dough for donuts following similar steps for twisting and baking in donut trays. The precise timings and results will vary dependent on the dough being used.

What toppings can I use for cinnamon roll donuts?

I recommend the vanilla glaze in this recipe, but I am biased - I love classic vanilla and a traditional glazed donut! You can absolutely try other glazes or frostings here.

Cream cheese is a popular option that I have no doubt will go well with these donuts. Try adding a tablespoon or two of spreadable cream cheese to the glaze recipe here and adjust the milk and powdered sugar dependent on desired consistency.

How long do these cinnamon dough donuts keep?

Much like cinnamon buns, these cinnamon roll donuts are best served fresh! If you have leftovers, they can be eaten the next day - store covered in a cool place to keep as fresh as possible.

If you like these, why not try some more other cinnamon rolls: 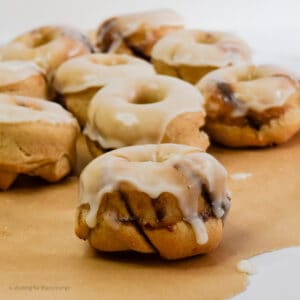 See blog post for more tips as well as video of preparing and shaping the dough.