My cinnamon pound cake is like a cinnamon roll in cake form! This pound cake is perfect paired with a combination of cream cheese frosting and the addition of candied cinnamon walnuts.

As with my other pound cake recipes, making cinnamon pound cake is an easy one-bowl recipe.

Simply beat together your butter and sugars until these are light fluffy and well creamed.

Add in the eggs on at a time, beating well after each addition. Then add in the vanilla and beat to incorporate.

Next add half of the dry ingredients - I do this by adding the baking soda, baking powder, salt and cinnamon with about half of the flour. Beat to combine and be sure to scrape the sides of the bowl with a spatula.

Then, add the soured milk and beat to combine, followed by the remaining half of flour.

Pour the batter into your baking tins and smooth out the tops.

My timings are based on making a three layer 5.5" cake. You can, however, make this same batter in a single 9" cake round, two 7.5" cake round or even as muffins (the batter will make about 9 conventional muffins). The timings for different tins will vary, but all can be baked at the same temperature of 350°F (175C/155C Fan). Just be sure to check for a skewer inserted in the centre coming out clean.

Once baked, remove from the oven and allow to cool in the pans for a couple of minutes before turning out to cool completely on a wire rack.

This cake pairs well with my easy cream cheese frosting. A single batch of the frosting will easily sandwich the three layered 5.5" cake or two 7.5" layers.

To add a bit of texture, also use candied cinnamon walnuts. For this cake, about a quarter batch of my candied walnuts will suffice for an add-in, no matter the size of your bake.

Simply stack the cake with a layer of cinnamon pound cake, a layer of frosting, a few walnuts and repeat. On the top layer, you can either sprinkle the walnuts across or make a ring around the edge for an elegant finish.

Cinnamon pound cake will keep for several days if stored in an air tight container. If you are using the cream cheese frosting, leftover cake should be stored in the refrigerator, however, this will decrease its shelf-life as refrigerators dry out cake layers.

If making in advance, store the cake layers wrapped in clingfilm at room temperature. It is best to assemble with the frosting on the day of serving for the freshest product.

Can cinnamon pound cake be frozen?

Yes, this cake can easily be frozen. It is best to freeze the elements - the cake, frosting and nuts - separately. Defrost and then assemble when ready to serve.

What other combinations work well with cinnamon cake?

The nuts are entirely optional and mainly offer a fun touch of extra texture. 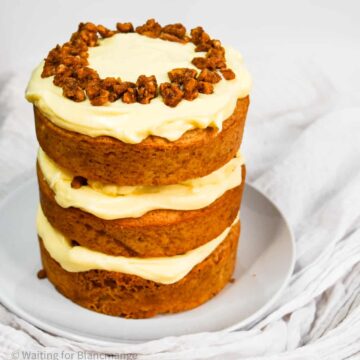