Is it ever too late or too early for pumpkin? I don't think so! My pumpkin pecan loaf is the perfect spiced pumpkin bread with chopped pecans thrown in! Topped with a maple cream cheese drizzle, this is sure to be a family favourite in the fall and all year long!

The key ingredient in pumpkin bread is canned pumpkin purée. It is important that this is the tin of pure pumpkin, not pumpkin pie filling!

Pumpkin pie filling is pre-mixed with additional ingredients, such as spices and sweetener. It is a fundamentally different product. The pie filling will taste different and may also react differently, producing a different texture to the end bread.

Sugars and Spices for Pumpkin Bread

This recipe calls for a mix of sugars. I use part plain caster sugar (AKA granulated sugar in the US - the fine ground sugar normally used in baking). The other part is light brown muscovado sugar (packable light brown sugar).

The brown sugar adds a molasses-like flavour to the mix. You could substitute this for caster sugar if needed or preferred.

Spices help to further accentuate the warm flavours of pumpkin. In this recipe I've chosen:

This loaf can easily be made in one bowl by following these simple steps:

This mixture can then be spread evenly into a prepared baking tin.

For a pecan topped pumpkin bread, add a few pecans to the top before baking.

This recipe has been made to fill a standard sized loaf tin, but could also be made in smaller mini loaf tins or muffin tins instead. Baking times for different tins will vary.

The maple cream cheese glaze on the top of this bread is a two-ingredient recipe, which can be amended to taste. The ingredients are simply:

Alternatives for this Recipe

If you are looking for a pumpkin loaf without cinnamon or ginger, this recipe can easily be adapted for your needs. While I highly recommend the spicing instructed in this recipe, these can be left out entirely or amended if that is more to your taste.

Avoid adding more than a cumulative 2 teaspoons of spicing as this will start to impact the ratios or dry ingredients and may cause trouble to the loaf.

This recipe offers loads of versatility. If you are not a fan of pecans, why not try one of the following options:

If experimenting with the add-ins, substitute the ingredients using the same measurement of pecans called for in this recipe. Avoid adding more than ⅓ cup cumulative of add-in ingredients or you may impact the baking of the loaf.

Changes for the glaze:

If you are wanting to make this recipe vegan and/or dairy free, you will need to substitute the butter, egg and cream cheese.

As noted about in the options for alternative glazes, it is easy to amend the maple cream cheese glaze to a mixture of icing sugar and maple syrup. This may not be as thick and creamy, but will still provide a nice maple topping for the loaf. You could also use a vegan cream cheese such as Violife Vegan Cream Cheese for a more direct substitute.

For the loaf itself, try using a vegan substitute in place of the butter, such as vegan butter, ghee or oil. There are other options for substituting with banana, applesauce or coconut butter but each of these will bring a bit of a flavouring to the final product.

For the egg, you can use about ¼ cup of oil as an easy replacement.

How long does the pumpkin bread keep?

This pumpkin pecan bread can keep for about 4 days in an air tight container on a cool countertop. Refrigerating the loaf will hasten its staling. If you are making this ahead, I would recommend adding the maple and cream cheese frosting on the day of serving rather than in advance, for this to keep better.

Can I freeze this loaf?

Yes, the loaf can be frozen, either frosted or before frosting. Defrost prior to eating.

All of my pecans have sunk to the bottom of the loaf, is this normal?

Add-ins sinking to the bottom occasionally happens during the baking process. A way to avoid this happening is to dust the add-ins (such as nuts or chocolate) in flour prior to folding in. This can help them to distribute more evenly and stay in place while baking. 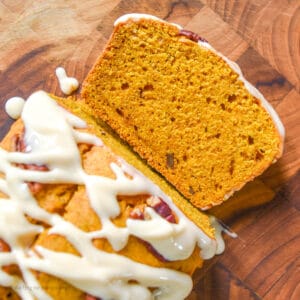