Tired of a plain strawberry Swiss roll cake? Try my autumn inspired cinnamon Swiss roll! My step-by-step guide will give you tips and tricks to achieve the perfect roll cake with a cinnamon spice twist.

What is a Swiss Roll Cake

A Swiss roll cake is essentially a light and airy rectangular sponge cake, which is then rolled with cream filling to create a log shape with a spiral of cake and cream inside.

The first thing you want to do in making the cinnamon Swiss roll or any roll cake is to line the bottom and sides of your pan. I used a quarter sheet pan for my cakes, but this recipe can also be made in a slightly larger conventional jelly roll pan (the timings may vary a bit).

Use a bit of butter or oil to grease the pan and line with a layer of parchment paper.

The trick here is to use the grease to stick the parchment paper into the tin (so that this doesn't move about). Do not grease or flour the top of the parchment paper. This is because your roll cake will be super light and airy. It is a greaseless cake and you don't want any butter or oils to come in contact with the actual batter.

Once lined, set aside the pan, preheat your oven and make the batter.

So the method for a Swiss roll cake batter is really in three stages:

Many traditional sponge cakes are leavened using eggs. In particular, the inclusion of an egg white meringue can contribute to a light and airy cake.

The process to making a meringue is all down to whisking.

First, add the egg whites and cream of tarter to a large bowl. Cream of tarter isn't strictly necessary in meringues, but it does help to add stability and strengthen the final product.

Whisk for a couple of minutes until you reach soft peaks. Your mixture will become frothy and full of bubbles.

Then add your caster sugar one tablespoon at a time while continuing to whisk. Increase the speed to high and whisk until glossy and stiff peaks. The classic test for stiff peaks is to hold the bowl of meringue over your head - the meringue should be stiff and shouldn't budge.

Set the meringue aside while you make the base batter.

2. Making the Base Cake Batter

In order to make the base batter for a cinnamon Swiss roll cake, first combine the dry ingredients in a large mixing bowl. These are the flour, brown sugar, baking powder and spices.

Meanwhile, add the wet ingredients - the egg yolks, vanilla and water - to a jug and whisk together.

Add the wet to the dry and whisk to combine.

3. Putting it All Together

Your goal is to preserve as much of the air from beating the meringue as possible, but you also want this to be well folded so that there aren't patches of pure egg white meringue in the batter.

Pour the batter into the prepared jelly roll pan. This is best achieved by pouring into one place in the middle of the pan and then spreading gently into the corners with an offset spatula to even.

Bake at 350°F (175C/155C Fan) for about 20-25 minutes, watching for the cake to be well risen and lightly golden. If you touch the cake lightly, it should not be sticky, and should be beginning to spring back lightly.

Once baked, remove from the oven and allow to cool in the tray for 5 minutes. During this time, the cake may sink back onto itself a little bit (like the second image below). This is expected and is what you are looking for to ensure a roll-able sponge cake.

So, making the roll for your cake is a process which is probably far easier to do than it is to explain! But, basically, the key equipment you will need here is patience, parchment paper and some powdered icing sugar (or confectioner's sugar).

After allowing the cake to cool in the pan for 5 minutes, sprinkle the top with icing sugar.

Remove the cake pan, which will reveal the cinnamon sponge cake still in the parchment paper lining from tin. Slowly peel this off.

This smooth side, which had been the base of the cake in the pan, will be the outside of the roll cake.

Allow the sponge cake to cool on the wire rack for another 5 minutes. Then, lightly dust with powdered sugar and cover with a clean piece of parchment paper. Carefully use this to invert the cake again (so that the side which was the top of the cake in the tin is now again on top).

Once rolled, leave aside to cool while you make the homemade cool whip filling.

Now, if you're looking for a quick cheat to this recipe, you can just use a standard 8oz tub of Cool Whip if you have that available. In the UK, however, there is no Cool Whip, so any stabilised whipped toppings have to be homemade.

This is actually far easier than you might think!

This recipe is adapted from my basic stabilised whipped cream recipe, but with added gelatine to provide a firmer set to the filling. This helps to provide better structure for a roll cake.

All you need for this recipe is:

In order to incorporate the added gelatine to a cold cream, you will first need to soften this and then liquify it.

Sprinkle the powdered gelatine overtop 1½ tablespoons cool water in a heatproof bowl. Allow it to soak for 10 minutes to soften.

Meanwhile, scrape the vanilla seeds out of the vanilla pod and add these to the cream in a large mixing bowl. Place this in the refrigerator to chill until you're ready to use.

Add a small amount of recently boiled water to a saucepan over a low heat, so that this stays warm. Once the gelatine has fully softened, place the small bowl into the centre of this warm water bath. This will make the gelatine melt and turn to a runny liquid.

Once liquified, remove from the water bath and set aside.

Return to your cream. Take this out of the refrigerator, add the powdered sugar and begin to whisk using either a stand mixer fitted with a whisk attachment or a handheld electric beater.

Once you reach a soft peak stage, where the beaters are leaving tracks in the cream, pause the whisking. Take a small spoonful of the cream and add this to the liquid gelatine. Stir this to combine.

Then, returning to whisking, slowly pour the liquid gelatine into the cream. Beat until you reach stiff peaks, but try to avoid over-beating.

By the time you have finished making the cream, your cake will be cool enough to fill.

Carefully unroll the cake, leaving the parchment paper underneath.

There will be some cracks and creases on the inner side, but these will be covered by filling, so shouldn't be too problematic. Avoid stretching the cake back as this can cause it to crack more significantly and break.

Spread the cream in an even layer over the cake and then add some fruit sauce. I used a couple of tablespoons of my spiced plum sauce, but you could also use a jam. My spiced blackberry jam or cherry jam would compliment this roll nicely.

Carefully re-roll. You can use the parchment paper to help you do this gently and to give a bit of support.

Wrap the cake in cling film and refrigerate to allow the gelatine to firm up a bit and set before slicing.

So the key to a roll cake is unsurprisingly the roll itself! I'll be honest, I've long been terrified of roll cakes and nervous about cracks. But, with these few tips, you can avoid roll cake disaster!

How long does this cake last?

Fully assembled and wrapped in the clingfilm, this cake can last for a couple of days in the refrigerator and is a handy make ahead dessert.

The homemade cool whip can be made a day in advance of assembling the cake and kept in the refrigerator.

You cannot make the cake layer alone in advance of completing the roll cake as this needs to be filled and re-rolled while as fresh as possible.

Can I freeze cinnamon Swiss roll?

Yes, a Swiss roll cake can be frozen for about three months. In order to freeze, assemble the cake as described in this post and refrigerate for a few hours to fully set up. Then wrap in a layer of aluminium foil or place in a freezer bag and transfer to the freezer.

My homemade cool whip is really thick and not smooth, what happened?

Most likely you've over-whisked the cream. This isn't a seriously problem in a roll cake. Since the cream is a filling, you can smooth it out as much as possible in a layer over the cake and it will still roll well and hold shape.

My roll cake split, what happened?

See above for my tips on roll cakes cracking. If it has split, it will still be delicious! But if you're looking to present it, maybe try a dark chocolate ganache or a frosting over top to hide the crack?

Or some more cinnamon spiced inspiration: 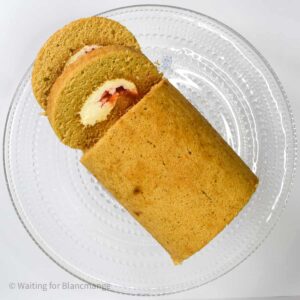 The pan used in this recipe is a quarter sheet pan (roughly 8.5"x12"). You can also easily use a 9"x13" pan or a traditional jelly roll pan (which is 10"x15"). The baking times will vary slightly - the larger the pan the thinner the cake layer and the quicker it will bake. If using a jelly roll pan, reduce the baking time to about 12-15 minutes rather than 20 called for in this recipe. See blog post for other tips and tricks.