Quick and easy maple candied nuts are a thing of beauty! These maple cinnamon walnuts are a simple snack and a great make ahead gift idea.

To make these walnuts, you'll only need a few ingredients:

There are a couple of ways to make candied nuts. You can do this in the oven or on the stovetop. For the quickest method, I recommend the stovetop and using a shallow non-stick frying pan. I use a Russell Hobbs Crystaltech pan, that has worked really well for this recipe.

This is a one-pan recipe.

In a shallow non-stick frying pan, mix together your nuts, syrup and spices. Stir through to coat the nuts in the syrup and cook over a medium heat until the spices dissolve.

Bring the mixture to a boil. The nuts will become sticky and glossy with the maple syrup after about 10 minutes. They will then move to a stage where the syrup begins crystallising and candying the nuts.

Once the nuts appear coated in sugar crystals, remove from the heat and transfer to a bowl or piece of parchment paper to cool.

How long do candied walnuts keep?

These cinnamon walnuts will keep well for a couple of weeks. Store in an airtight container for best results. If making them as a gift, they can easily be made several days in advance.

Can I freeze candied walnuts?

Yes, you can freeze candied walnuts. Be sure to allow them to cool completely first before transferring to a freezer safe container or bag. They can be frozen for a couple of months.

My walnuts are not crystallised, they're sticky. What has happened and can I fix this?

If your nuts are still sticky, then these haven't quite cooked long enough - you can return them to the pan and to heat until they begin to develop a grainy crust (crystallised texture).

Alternatively, the sticky nuts can be used as they are for topping ice cream or other desserts. They won't be crisp and they also won't keep quite as well for as long as the fully candied version. Dependent on what you're using them for, these may still work great! 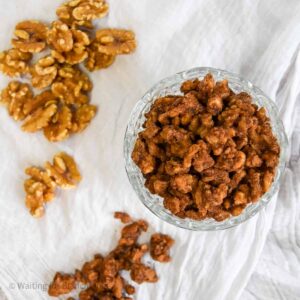