Who else loves a peach crisp or cobbler? I'm a massive fan of peach and anything with cinnamon! Taking the two together, I present: cinnamon peach poundcake cupcakes. Inspired by a the warmth of a fruity cobbler classic, this super easy recipe will provide a dozen deliciously moist cupcakes with a lightly spiced buttercream to accompany.

Ingredients for a Cinnamon Peach Poundcake

These cupcakes were developed based on my classic poundcake recipe and the batter could be used to make a single larger cake if that's preferred. The only thing you would need to change is the time in the oven!

For this recipe, I'm working with some limitations. Peaches in Britain are not great. Even when they're in season, they tend to run small and underripe. For the sake of getting my peach fix, I often resort to the tinned variety. Handily, canned peaches are available year round, and also provide the canning liquid to aid in the flavouring and moistness of the bake.

For the cakes you'll need:

This is a super simple recipe to whip together and shouldn't take more than 10 or 15 minutes.

If making cupcakes, fill your tray with cupcake cases. I used these from the Cake Decorating Company. Honestly, they've revolutionised my cupcake making, providing a good sturdy case that doesn't leak any grease in the pan. If making a larger cake or loaf, grease and flour a tin. Preheat your oven to 350°F (175C/160C Fan).

In a medium bowl, mix together your dry ingredients: flour, baking soda, baking powder, salt and spices. Set this aside. You'll want to have your chopped peach half at the ready and set aside as well.

The main liquid in this recipe is a half cup of peach juices from the tin. If you want to use fresh peaches instead, you absolutely can. You will, however, need to replace the liquid here with an alternative to the juice from the tin. As this is technically a poundcake, you could revert to classics such as buttermilk or soured milk. Alternatively, you could try a peach juice - either made from fresh peaches or store bought.

In the bowl of an electric mixer, beat together your sugar and butter until well creamed. Add your eggs one at a time and then the vanilla. Then incorporate your dry ingredients in alternating additions to the liquid. I always start with my dry ingredients in thirds, interspersed with my liquid by halves. Prior to adding the final third of the dry ingredients, mix your chopped peaches with the flour mixture. This will help the peaches to incorporate into the mixture more evenly.

Spoon the batter into your cases, filling about half way or three quarters. Bake for about 20 to 30 minutes - keeping an eye after 20 minutes and checking with a skewer. Once a skewer or toothpick inserted in the centre comes out clean, you know you're done! You may want to flip your tray around halfway through if your oven, like mine, cooks a little unevenly.

Once baked, remove from the oven and from the tin, allowing to cool on a wire rack.

Cupcakes aren't really cupcakes without icing... For these, I've paired them with the perfect cinnamon buttercream!

Buttercream is my favourite and my go-to frosting for all occasions. Cinnamon buttercream is a super simple version, adding just a bit of ground cinnamon to the mix, which comes through really well. As I still had some extra juices from the tin, I also figured, why not add that in too!

For buttercream, you will need room temperature butter, soft enough to beat. I'd definitely recommend using an electric stand mixer for this, but I appreciate that may not be an option. If you don't have access to a stand mixer, you can cream this together by hand, but it will take a bit longer.

In the bowl of an electric mixer, beat the butter for a minute until it is creamy. Next, add the sifted icing sugar. I do this in two additions. First, I add half and beat to combine, then I add the second half and begin beating. While it is beating after the second addition, add in your cinnamon, vanilla and peach juices. Beat for a couple of minutes on a low setting until well mixed and creamy.

Depending on what you want to do with the icing, you may then want to add a bit of milk. The milk will thin out the frosting and should be used sparingly to avoid making this into a glaze. If you want to pipe your frosting, adding a teaspoon of milk will make all the difference to the ease of using it!

All that's left is to cover your cakes in the frosting and enjoy! 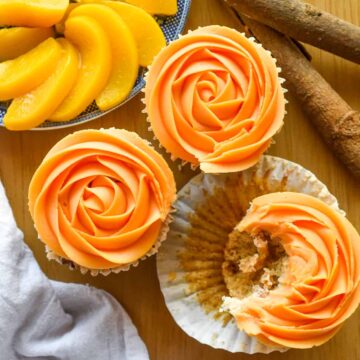 Instructions for the Cinnamon Peach Buttercream