A cinnamon spiced plum compote. A perfect sauce to accompany your desserts, a topping for ice cream or a fun addition to yoghurt! Four ingredients, versatile and super easy.

This is an easy four ingredient recipe. All you need is:

Process for My Easy Plum Compote

As with other compotes and fruit sauce recipes, this is a one-pot recipe.

You will want to begin by placing your chopped plums, orange juice and brown sugar in a deep sided saucepan. It is important that this is deep sided because the boiling sauce will bubble up. The deeper the sides, the less messy later!

Cook this mixture over a medium-low heat, stirring as the plums begin to release their juices and the sugar dissolves.

Once the sugar has dissolved, raise the heat to medium and allow the mixture to come to a boil. Continue to stir and mash the plums a bit with your spatula. Let this mixture continue boiling for about 10 minutes.

Unlike jams, this plum sauce does not need to reach a certain temperature as it is not intended to set.

Remove from the heat and allow to cool.

You can serve this sweet plum sauce either warm or cool.

You can use this plum sauce warm or cool alongside many different desserts. Maybe try:

How should I store this plum compote?

This sauce should be kept in the refrigerator once cool. It can be stored either in a bowl covered in cling film or in another airtight container such as a jar.

How long does this plum sauce keep?

As with other compotes and fruit sauces, this can last for several days, refrigerated and is a great make ahead recipe if you are needing to prepare in advance.

Can I use frozen plums for this sauce?

Yes, you can use frozen fruit in sauces and compotes. For best and most flavorful results, fresh is best. For using frozen fruit, defrost this first and drain off excess water.

You can also use tinned plums, but take care to drain these. You will also want to adjust the sugar dependent on the sweetness of the jarred plums and what these were preserved in (water, juices, etc.). 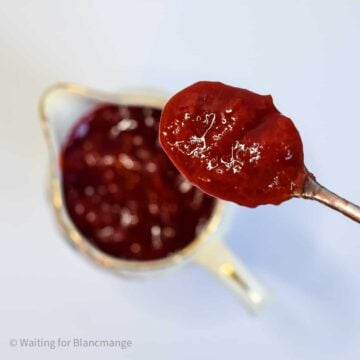 This recipe makes between 1 and 1½ cups of plum sauce dependent on the size of the plums and how long these have cooked down.