Inspired by the iconic Peruvian Pisco Sour cocktail, my Pisco Cocktail Cupcakes are a perfect zesty cake with a tipsy twist. With the addition of a pipette of pure Pisco, these are a cocktail and a cake all at the same time!

What is a Pisco Sour?

My husband and I had the opportunity to visit Peru in 2019, where we were first introduced to Pisco. The liquor is a clear brandy, produced in South America (primarily in Peru and Chile). It is considered the national drink of Peru and many places we stayed during our holiday offered a Pisco Sour as a welcome drink.

The classic Pisco Sour is a simple mix of Pisco, lime juice, simple syrup and an egg white.

The ratios of these may vary, but my favourite version is:

These are shaken together, with ice and an egg white, to produce a great frothy topped cocktail.

A couple of dashes of Angostura bitters finish the drink.

Where to find Pisco

Pisco is exported from Peru and is available in specialty drinks stores. It is more widely available in the US than the UK, but is still a bit of a lesser known liquor. In the UK, The Whisky Exchange has a wide range of Pisco. I usually use Barsol.

Boozy cupcakes have been a popular trend seeing many favourite cocktails turned into fun cakes. They are great for parties, offering a bit of a tipsy change to classic cake flavours.

The key to cocktail cupcakes is all about capturing the main flavours in your favourite drinks. This is often easiest with cocktails that have strong fruity flavours, such as strawberry daiquiris or piña coladas.

The addition of a pipette of the primary liquor gives a fun touch that brings it all together!

My Pisco Sour Cupcakes are made up of three main parts:

The primary fruit flavour in a Pisco Sour is the zesty lime. So, for the base of my Pisco cocktail cupcakes, I've used a lime cake, which is an amended version of my classic thrifty pound cake.

By using lime juice to sour the milk for a pound cake, you begin to infuse lime as a flavour into the recipe. With the addition of lime zest, the cake becomes a lime pound cake.

I also add a tablespoon of Pisco direct to the batter to help bring the notes of the liquor to the bake. This alcohol will bake off in the oven, but flavour remains.

These lime cupcakes are then filled with a lime curd. You can use either shop bought lime curd or make your own, following my recipe for a small batch lime curd. If making your own, you can add in a bit of Pisco to help accentuate this further. Again, if adding while cooking the curd, the alcohol in this will cook off.

Instead of icing, I cover my Pisco Sour Cupcakes with a meringue top. This is an ode to the egg white part of the classic cocktail. Meringue is also a lighter flavour and texture than a buttercream, which would be a bit overpowering with the rest of the cake.

If you make my lime curd recipe, use the leftover whites from the curd to make the meringue.

The final touch for my Pisco cocktail cupcakes is the pipette of alcohol. Little pipettes full of Pisco make for a special tipsy touch. Though Pisco is infused throughout the rest of the cake, it is cooked off elsewhere. If you are wanting to add a bit more of a punch, the pipette lets you have a tiny shot of Pisco along with the cake.

FAQs for my boozy cupcakes

How long do these cupcakes keep?

The cupcakes can keep for a day or two, but the meringue top will sweat in the fridge. If you are planning to make these ahead, I would recommend leaving off the top until the day you will be eating them. This will ensure they are at their freshest. The cakes, without the meringue can be kept for about 3 to 5 days at room temperature in an airtight container. They can also be frozen, though I would freeze unfilled.

I can't find Pisco, what alternatives could I use?

In this recipe, tequila would be a suitable substitute for Pisco to give a similar tipsy punch, working well with the lime.

Could I use lemon instead of lime?

Technically yes, any citrus fruit could be used in this recipe for a zesty cake. Lemon may be a bit overpowering and lime pairs best with the Pisco. 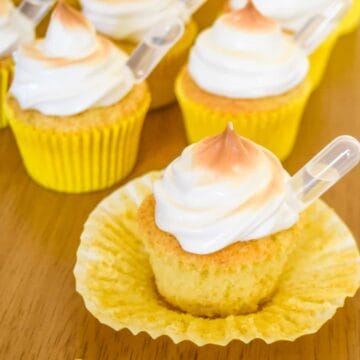 Instructions for the Lime Cupcakes