Red Velvet is a much-loved classic cake. These easy red velvet cupcakes are a quick, simple, single serving take on the traditional cake. Paired with my granny's traditional coconut pecan filling or with the more conventional cream cheese frosting, they're sure to be a hit!

What is Red Velvet Cake?

Red velvet cake is essentially a moist lightly chocolatey sponge cake. Traditionally, it gets its colour from a chemical reaction between cocoa powder and vinegar. Modern cocoa no longer turns a vibrant red. While a paste of cocoa powder and vinegar is still part of the recipe, other colouring agents are needed to keep up the red appearance.

As many classic American cakes, many recipes for red velvet cake mix will call for buttermilk. My recipe relies instead on a buttermilk substitute of soured milk.

Soured milk is easily made through a combination of vinegar and whole milk. In the case of the recipe below, ½ tablespoon of vinegar topped up with whole milk for the remainder of the half cup. This is a super easy alternative to keeping buttermilk around, but the measurements below can also be replaced with buttermilk or yoghurt with similar effect to the overall product.

While it is perfectly possible to make a red velvet cake with plain or all-purpose flour, cake flour is the best for a beautifully light sponge. In the UK, you cannot find cake flour as an ingredient, so a quick substitution is necessary.

A quick substitute for 1 cup of cake flour = ¾ cup plain flour + 2 tablespoon of cornstarch (also known as cornflour). Use these measurements as a ratio if your recipe calls for more or less cake flour.

My Granny's southern red velvet cake calls for a whole 2oz bottle of red liquid food colouring. I'm not a great fan of using red dyes, especially in those quantities, so I opt for gel colour and often make my family more of a pink velvet cake. Same great flavour, less chemical! It is also possible to use natural alternatives such as pureed beets.

Instead of cream cheese, though, you might prefer the classic southern red velvet filling! Traditional red velvet filling is a coconut pecan based frosting, made using a thickened milk mixture, along with sugar, butter, nuts and coconut. This filling is reminiscent of the frosting associated with a German chocolate cake and pairs well with the lightly chocolate red velvet.

Can I make this recipe as cake instead of cupcakes?

Yes! It is based off of my family's red velvet cake, but scaled to fit a 12-hole cupcake tray. If you'd rather make a cake, the same recipe will make you two 6" rounds, or double the whole recipe to make the traditional three 9" rounds. Baking times will vary a bit based on the pan size.

Can I freeze red velvet cakes?

Yes, you can freeze these cupcakes. I always recommend freezing unfrosted as the icing may sweat on defrosting. Once cool, package the cupcakes in airtight bags or containers and freeze for up to 3 months.

How long do these keep?

You can freeze the cake for about 3 months or keep at room temperature in an airtight container for 3 days. I'd not recommend refrigerating the cakes undecorated as the refrigerator will dry these out. If you have frosted these with a cream cheese icing or with the recommended coconut pecan filling, these should be kept refrigerated until being consumed. 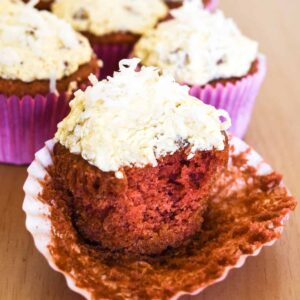